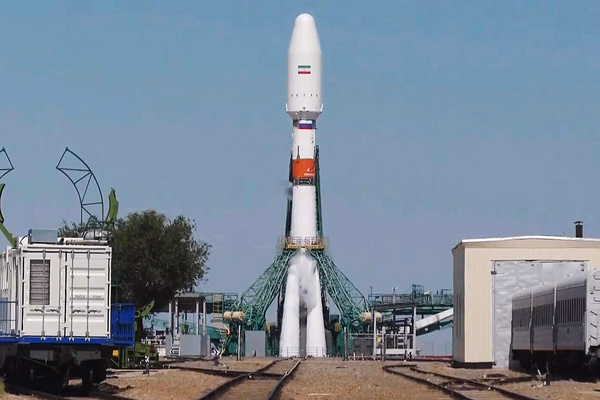 On Tuesday, August 9, at 10:22 am, the Iranian Khayyam Satellite, which belongs to the ISA was launched into its programmed 500-Km earth orbit from Kazakhstan’s Baikonur Space Station on a Russian Soyuz carrier.

The successful launching of that satellite into its planned orbit took about two hours, and the satellite began transmitting its first telemetric signals to Iran’s Mahdasht Space Site right then. Four months is needed for providing the people with all capabilities of Khayyam satellite given the existing preconditions in the competitive market at the service of the Iranian nation.

The remote-sensing Khayyam Satellite that weighs almost 600 kilograms is now orbiting the earth at an almost 500 kilometer distance from earth.

This satellite is equipped with optical measuring devices in different spectrum and is capable of differentiating images with one-meter distance precision capability, and is designed and manufactured aimed at improving the country’s capabilities in management of its resources in various fields.

The inputs of Khayyam Satellite enable it to offer services in such fields as agricultural activities, natural disasters’ management, changes in rural maps, mine discoveries, and sustainability of water resources.

In the agricultural field, we can refer to studying the soil moisture and plantation, management of economizing in water usage in agricultural activities, monitoring the barriers of cultivated lands in various regions, predicting the volume of crops before harvesting, distinguishing the cultivated types, surveying the soundness of the products and their possible pests, and monitoring the seasonal changes in different plants.

Monitoring and surveying the seasonal changes at earth level, and observing and surveying the movements and alterations in water, dust and air pollution, surveying the plantation and jungles’ coverage, and identifying the dust centers, evaluating the inflicted damages to lands, desertification process and soil erosion, as well as monitoring the deserts’ status, are among Khayyam Satellite capabilities at the service of environment protection.

Another major capability of the remote-sensing satellites is their radar capabilities, using which their can contribute to environment protection efforts.

In this field, the Khayyam Satellite can prepare risk-model maps and motor the disaster areas, identify the new appropriate residential areas. In addition, it can monitor the alterations in city maps, the distances between cities, the most and least populated areas, the changes in usage of lands, preparation of rural and urban maps, and monitoring the illegal constructions.

Monitoring and surveying the mines’ maps and the way they are scattered in the country, surveying the alterations in sea borders, the area of ponds and lakes’ water and the water reserves in dams’ lakes are among the other capabilities of this Iranian satellite.