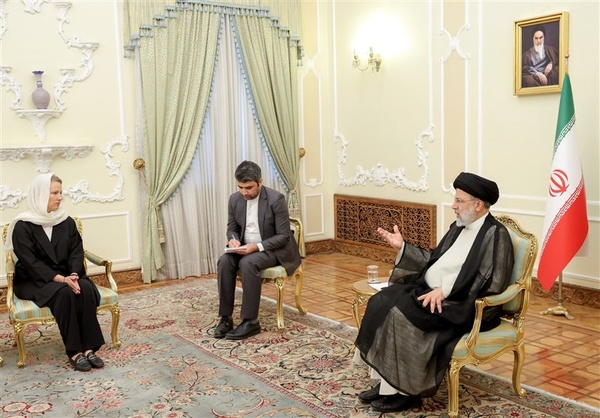 President of Iran Ebrahim Raisi put the onus on the US to comply with the requirements for the negotiations and agreements, denouncing its irresponsible move to initiate an anti-Iranian resolution at the IAEA amid the talks for saving the JCPOA.

In a meeting with Switzerland’s new ambassador to Tehran on Monday, Raisi slammed the recent move by the US and the European troika to propose a resolution against Iran at the International Atomic Energy Agency’s Board of Governors, while the negotiations are underway to revive the 2015 nuclear deal, saying such “irresponsible measure” in violation of the spirit of negotiations and agreements indicated their contradictory conducts.

“The US must make a decision to remain committed to the requirements for negotiations and deals,” Raisi added.

“The US and the European countries are miscalculated about Iran,” the president added, calling on the new Swiss envoy to let her country and the other states know about the realities in Iran so that they would realize that the Islamic Republic has been making progress despite the hostilities and that their hegemonic policies have backfired.

Hailing the age-old relations between Iran and Switzerland, the president expressed Tehran’s readiness to broaden the political, economic, and trade ties with Bern.

For her part, Nadine Olivieri Lozano said Switzerland and Iran have always maintained positive and constructive cooperation during more than 100 years of diplomatic relations.

She also noted that her main plans as Switzerland’s ambassador in Tehran will include efforts to expand ties with Iran.