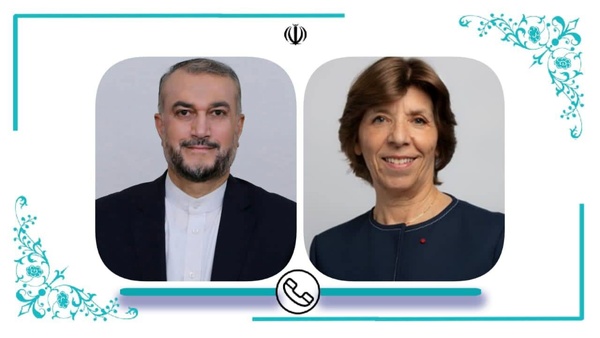 Iranian Foreign Minister Hossein Amir Abdollahian said that Iran is serious and honest to reach the final point of a good and lasting agreement, and has always put forward our positive suggestions in negotiations.

Amir Abdollahian made the remarks in a phone call with Minister for Europe and Foreign Affairs of France Catherine Colonna.

He emphasized Iran’s readiness to increase the level of cooperation based on mutual respect and cooperation.

Referring to the negotiations on lifting sanctions in Vienna and Doha, he said: Our assessment of the recent talks in Doha is positive, but we should wait to see how the US wants to take advantage of the diplomatic opportunity.

Now the path of diplomacy is open. We are serious and honest to reach the final point of a good and lasting agreement, and we have always put forward our positive suggestions in negotiations.

The US attended Doha without an approach based on initiative and progress, he stated.

We believe that repeating previous positions should not replace political initiative, he reiterated.

Iran has always complied with its obligations and expects the other parties to fulfill their obligations properly, Amir Abdollahian said.

Meanwhile, Colonna welcomed good relations between Tehran and Paris and emphasized the necessity of continuing nuclear negotiations and lifting sanctions.

She called for using the opportunity to negotiate and try to reach an agreement that is satisfactory to all parties.

We believe that the diplomacy window is still open and we should use it in the best way to reach an agreement, she stated.