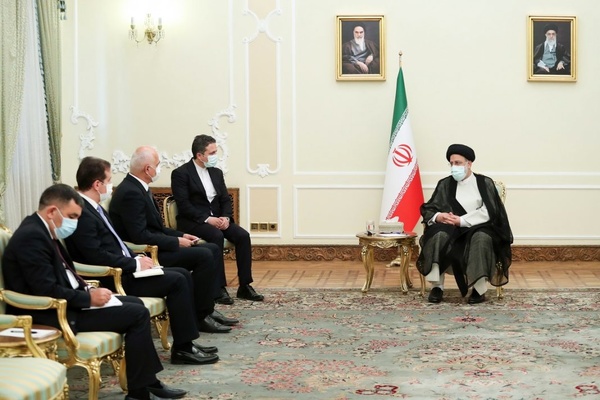 Iran’s President Ebrahim Raisi says the most important factor that can strengthen regional security is the existence of constructive relations between neighboring countries. He made the remarks in a Thursday meeting with Azerbaijan’s First Deputy Prime Minister Shahin Abdulla Oghlu Mustafayev in Tehran.

During the meeting, Raisi highlighted Iran’s “principled position” on supporting the unity and territorial integrity of all countries, including the neighboring Republic of Azerbaijan.

“The existence of constructive relations on the basis of mutual interests between neighboring countries, including Iran and Azerbaijan, is the most effective factor in maintaining and bolstering the regional security,” Iran’s president stated.

He added that the United States and the Zionist regime are not sympathetic toward regional countries and other nations across the world.

Noting that Iran welcomes all-out expansion of economic, political, cultural and trade ties with Azerbaijan, Raisi called for complete implementation of agreements between Tehran and Baku in various fields, especially economy and transit.

“Iran and Azerbaijan are more than mere neighbors as they share the same religion and the same culture…. No factor must be allowed to harm the two countries’ friendly relations,” he noted.

Mustafayev, for his part, said the Republic of Azerbaijan is persistently pursuing the implementation of agreements between the two countries.

The Azeri official added that new plans are being drawn up to implement new rail, road and transit projects with the aim of developing relations between the two neighbors. The relations between Iran and Azerbaijan, he stated, have progressed and developed in all sectors.