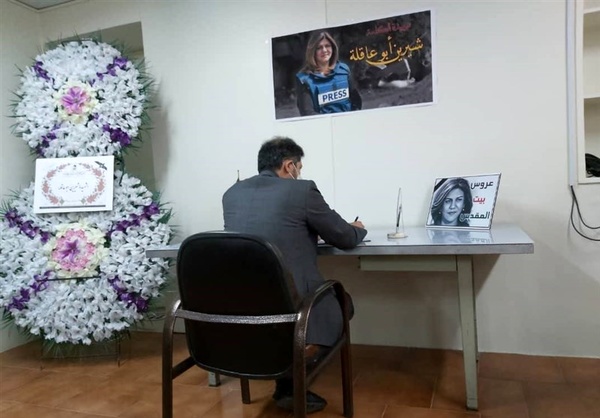 The spokesperson for the Iranian Foreign Ministry visited the Embassy of Palestine in Tehran to pay tribute to Al Jazeera journalist Shireen Abu Akleh who was killed by the Israeli forces in the occupied West Bank on May 11.

Saeed Khatibzadeh visited the Embassy of Palestine in Tehran on Sunday and signed a book of condolence in commemoration of Shireen Abu Akleh.

Condemning the terrorist move by the Zionist forces to kill the reporter, the Iranian spokesman offered his condolences to the late journalist’s family, the people of Palestine, and media activists.

Veteran Al Jazeera journalist Shireen Abu Akleh was shot and killed by Israeli forces in the occupied West Bank on May 11. The 51-year-old was covering an Israeli army raid on the Jenin refugee camp when she was shot in the face by a single bullet, despite wearing a press vest.

Al Jazeera, in a statement, said Abu Akleh was “assassinated in cold blood” and called on the international community to hold Israeli forces responsible.