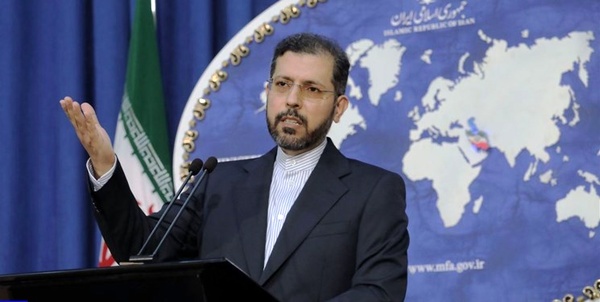 Talks between Iran and the Group 4+1 (Russia, China, Britain, and France plus Germany) continue without pause while the country has repeatedly stated that the exchange of messages between Tehran and Washington is continuously underway through the Joint Comprehensive Plan of Action (JCPOA) coordinator, Khatibzadeh told reporters in a press conference in Tehran.

Asked about the upcoming visit of the European Union’s coordinator for Vienna talks Enrique Mora to Tehran, he said Mora will have a meeting with Iran’s top negotiator Ali Baqeri Kani.

If the US decides this very day to give back what it has taken from Iranians’ pockets, an agreement can be reached after Mora’s visit, Khatibzadeh noted.

What has happened in Vienna is because of Washington’s indecision, he said, adding that the US is not supposed to present a gift to Iran; it has to give back the rights of the Iranian nation.

Iran and G4+1 have agreed on the text of an agreement and the decision from the US will easily bring about an agreement in Vienna, Khatibzadeh said.

Iranian Foreign Minister Hossein Amir Abdollahian said last Tuesday that the Vienna talks are still underway through an exchange of written messages between Tehran and Washington via the EU coordinator.

“The Vienna talks have not been paused, but they continue in another process to remove the unilateral sanctions imposed on us and through the exchange of written messages with the Americans through the EU representative,” Amir Abdollahian said in an interview with Yemen’s Arabic-language al-Masirah television network.

He underlined that Iran’s objective in the talks is to reach a “strong” and “permanent” agreement, adding, “We urged the American side to be realistic."

“Removing sanctions in all areas and receiving economic guarantees are among the most important items on our negotiating team’s agenda.”

“We will continue the dialog. As soon as an agreement is about to be reached, our representative in the negotiations will make the final changes to the agreement,” Amir Abdollahian said.

The Islamic Republic has made clear that both the JCPOA and the UN Security Council Resolution 2231 are the benchmarks for the Vienna talks, rejecting anything less or more than those two.

Several rounds of negotiations have been held in the Austrian capital since April 2021 to bring the US back into the Iran deal. The Vienna talks, however, exclude American diplomats due to their country’s withdrawal from the deal, officially called the Joint Comprehensive Plan of Action (JCPOA), on May 8, 2018.

Recent weeks have brought the talks to a new impasse, as the US insists on its refusal to remove Iran’s Islamic Revolution Guards Corps (IRGC) from its foreign terrorist organization list.

Iran maintains that the IRGC’s designation in 2019 was part of the former Donald Trump administration’s so-called maximum pressure campaign against Iran, and therefore, it has to be reversed unconditionally.