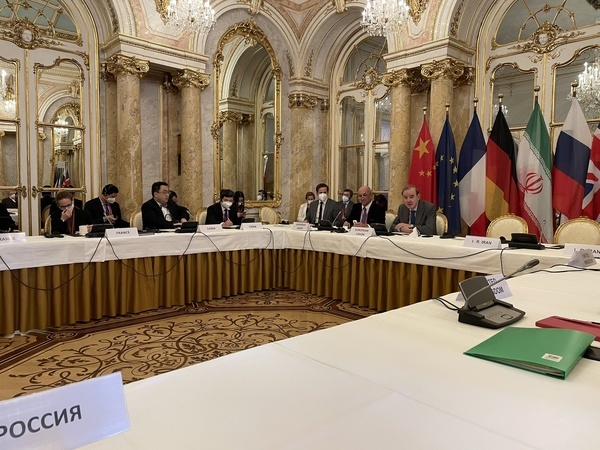 Despite a painful start weeks ago, international talks to save the Iran nuclear deal have entered the New Year with positive signals emerging, including the EU saying Friday that a deal remained possible.

There has been a marked shift in tone since the current round began in November, even if the Western powers complain how slow the process is at a time when Iran accelerates its nuclear work.

“Today I believe reaching an accord is possible,” even within the coming weeks, he said after an informal meeting of EU foreign ministers in Brest, France.

Iran’s foreign ministry spokesman said earlier this week that efforts by “all parties” to revive the 2015 nuclear agreement had resulted in “good progress” during the Vienna talks.

And Russian Deputy Foreign Minister Sergei Ryabkov said that the negotiations had “accelerated” and that “the chances of reaching a solution have risen”.

But French Foreign Minister Jean-Yves Le Drian, speaking next to Borrell on Friday, reiterated his view that the talks were progressing “much too slowly to be able to reach a result”.

Continuous negotiations to salvage the nuclear deal resumed on 29 November after they were suspended in June as Iran elected a new, ultraconservative president.

The 2015 deal — agreed by Iran, the United States (under Democratic president Barack Obama), China, Russia, Britain, France and Germany — offered Tehran sanctions relief in exchange for curbs on its nuclear programme to ensure it would not develop atomic weapons.

But Republican president Donald Trump pulled the US out in 2018 and reimposed biting sanctions, prompting Tehran to begin rolling back on its commitments.

Determined to revive the deal, Trump’s successor Joseph Biden, a Democrat who was Obama’s vice president, sent an American delegation to Vienna to participate indirectly in the talks.

uropean diplomats have been shuttling between the talks venue at a luxury hotel and where the US team is based.

US State Department Ned Price said on Wednesday that although there had been “modest progress in recent weeks” this was “not sufficient” to secure a return to the deal.

The main aims of the talks are to take the US back into the so-called Joint Comprehensive Plan of Action (JCPOA), and bring Iran back into line with the limits the deal laid down on its nuclear activities.

Among the outstanding bones of contention between Iran and Western powers are “sanctions relief, guarantees that the US will never again renege,… (and) the degree to which Iran has to roll back its nuclear program,” according to Ali Vaez, Iran specialist at the International Crisis Group.

He said that when it comes to verifying sanctions have been lifted, this will be “possible in two areas: Iran’s oil exports and its ability to repatriate the generated oil revenues and frozen assets”.

But the subject of future US actions is trickier as “there is no guarantee that any US administration can provide that would bind the hands of its successor,” he said.

But Vaez said the Biden administration “can and should provide assurances that companies that engage the Iranian market are immune to US penalties as long as Iran is in compliance with the deal.”

When it comes to dealing with the physical evidence of Iran’s increased nuclear activity, “the West wants Iran to destroy its advanced centrifuges” and the uranium enriched above JCPOA limits “will either have to be shipped to Russia or blended down”.

A European diplomat told AFP that while Iran was resisting the idea of destroying centrifuges, “putting them under seal or a range of intermediate solutions” were also on the table.

While the various delegations haven’t set a deadline for success, Secretary of State Antony Blinken said Thursday that there were only “a few weeks left” to save the deal, pointing to the increases in uranium enrichment Iran has been undertaking.

Blinken said that in the case of the talks failing, the US was “looking at other steps, other options” with its allies.

Vaez said new UN sanctions could be an option but US hawks, mainly among the Republicans, opposed to the deal want a campaign of economic and diplomatic pressure backed up by the option of military action.

Julia Masterson from the Arms Control Association think tank said the deal can be restored if both sides “are creative and flexible.”