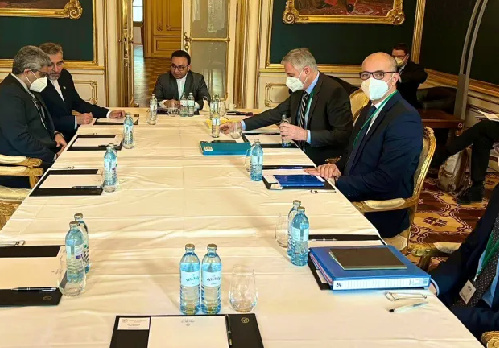 In the meeting, the two sides exchanged views on the schedule of this round of talks which were halted from December 27 to 30, due to the New Year holidays and resumed on Monday. Of course the talks continued informally during those three days as well.

A European official who spoke on condition of anonymity said that the negotiations were pursued during the past couple of days amid a favorable atmosphere, as the entire delegations’ attitudes were serious and they all interacted with one another.

The source said that the negotiations were constructive and the efforts are aimed at decreasing the differences of opinion, known as the parentheses.

According to that informed source, the past week negotiations were on termination of sanctions and justification. He said that the talks are progressing on the right track, but the speed of the talks aimed at reaching an agreement need to increase.

Iran’s top negotiator, Ali Bagheri Kani, said the more serious the other side will be in termination of sanctions and acceptance of the strategies proposed by Iran, the faster the agreement can be achieved.