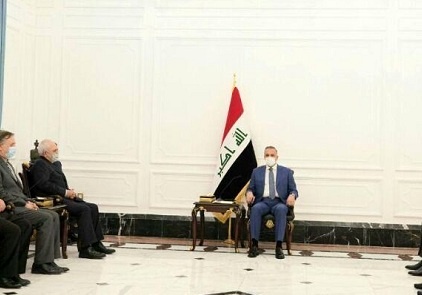 Minister of Foreign Affairs Mohammad Javad Zarif in his Monday meeting with Iraqi Prime Minister Mustafa al-Kadhimi informed him of the latest developments in Iran’s ongoing nuclear talks with G4+1 countries, appreciating Iraq’s support for JCPOA and termination of unjust, unilateral US sanctions.

Zarif who is in Baghdad for consultations on issues of mutual interest on Monday afternoon met and conferred with the Iraqi prime minister.

Zarif in this meeting appreciated the Iraqi prime minister’s efforts in pursuing the existing files on bilateral and regional relations related to the Islamic Republic of Iran, as well as Iran’s ongoing nuclear talks with the G4+1 countries.

The Iranian top diplomat also referred to some issues related to Iranian companies, economic and business firms, transportation and engineering companies, and their economic transactions, asking for Iraqi officials in resolving the problems with which they are entangled.

The Iraqi Prime Minister Mustafa Al-Kadhimi, too, emphasized in the meeting that Iraq does not merely consider Iran as a neighbor, but as a strategic partner.

He referred to Iran’s support for Iraq in its war against the ISIS terrorists, adding: Iran’s stand in that respect will never be forgotten in Iraq’s history.