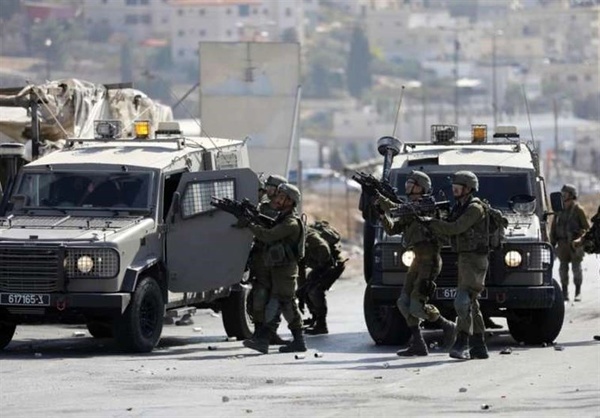 More than 80 Palestinian protesters have sustained injuries as Israeli forces carried out raids in and around the occupied West Bank city of Nablus.

This is according to the Palestinian Red Crescent Society (PRCS).

Palestine’s Ma’an news agency cited Ahmed Jibril, the director of the PRCS’s Emergency and Ambulance Center in Nablus, as saying that the injuries occurred following the Israeli violence in the city and nearby villages on Friday.

Jibril said the Red Crescent’s staffers dealt with the injury of a paramedic volunteer (pictured below) in the face with a tear gas canister, in addition to 15 cases of suffocation with tear gas in Beit Dajan.

They also dealt with four cases of gas suffocation and injury as a result of falling down on Jabal Sabih hill in the town of Beita. The PRCS’s crews also took care of an injury in Burin, in addition to 61 cases of gas inhalation in Qaryut village, south of Nablus.

In the past months, heavy clashes have been going on between the Israeli occupation forces and Palestinians on a weekly basis over Tel Aviv’s settlement expansion across the Palestinian territories.

About 600,000 Israelis live in over 230 settlements built since the 1967 occupation of the Palestinian territories of the West Bank and East al-Quds.

Palestinians want the West Bank as part of a future independent Palestinian state, with East al-Quds as its capital. The last round of Israeli-Palestinian talks collapsed in 2014. Among the major sticking points in those negotiations was Israel's continued settlement expansion.

All Israeli settlements are illegal under international law as they are built on occupied land. The UN Security Council has condemned Israel's settlement activities in several resolutions.