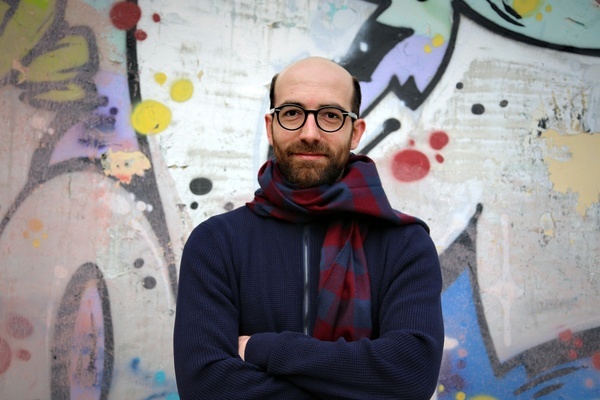 It is still way too early to speak about or even predict how or if they are going to be successful at all. But, I think that the possibilities for the creation of a new political and economic situation are quite solid.

Agon Hamza, Ph.D. in philosophy, is the author of Reading Marx (Polity, 2018; with Frank Ruda and Slavoj Žižek), Althusser and Pasolini: Philosophy, Marxism, and Film (Palgrave Macmillan, 2016), and From Myth to Symptom: The Case of Kosovo (Kolektivi Materializmi Dialektik, 2013; with Slavoj Žižek). In addition, he is the editor of Althusser and Theology: Religion, Politics and Philosophy (Brill, 2016) and Repeating Žižek (Duke University Press, 2015), as well as co-editor, with Frank Ruda, of Slavoj Žižek and Dialectical Materialism (Palgrave Macmillan, 2016). He is founder and co-editor (with Frank Ruda) of the international philosophy journal Crisis and Critique.

I think this government, led by Vetëvendosje! Movement is the necessary precondition for a new beginning, or a new chapter if you will, for the new possibility for Kosovo. There are a couple of reasons on which I am basing this claim. First, this was quite a long and difficult journey of VV, from its beginning, all the way to this point, which in itself, is a new beginning for the movement.

The movement was created back in 2005, by a handful of people, as a rejection of the UN administration of the country (known as UNMIK) and a response to the negotiations on the "final political status" of the country, which then turned out to be neither the final status nor political. Since the independence of 2008, the negotiations with Serbia continued and now we are facing the risk of an ethical partition of the country. It is important to recall that the project for “redrawing the borders” of Kosovo, albeit being terminated, is not altogether dead. The problem is that even now, based on the comprehensive Ahtisaari's plan (upon which Kosovo declared independence), the people of Kosova are divided into ethnicities (Albanians, Serbs, Romas, etc). The aim of the movement (which in it ranks has members of minorities - Serbs, Romas, Bosnians, etc.) is to eliminate these divisions based on a socio-economic program (employment, joint agricultural programs, etc.) and a dialogue from "the bottom", that is, in engaging in a dialogue with the local Serbs first.

During this period, from 2005 onwards, they were known as a tough opposition, which organized demonstrations, protests, threw tear gas in the parliament; a movement whose three activists were murdered in protests and in prison, and many dozens were injured.

I said it’s a new beginning for VV, which is not the very first one in its history, VV started off as a non-institutional movement, operating outside of the parliament and local governance. The first shift happened in 2010 when they ran for parliamentary elections.

This said, I want to argue that VV won not due to its stance as an opposition, but due to its socio-political program, which in the given conjuncture, stands for a “realistic” leftist program, i.e. investments in the public sector, education, anti-corruption fight, stopping and revising the hitherto privatization etc.

It is still way too early to speak about or even predict how or if they are going to be successful at all. But, I think that the possibilities for the creation of a new political and economic situation are quite solid.

ILNA: The new Kosovo government will be expected to negotiate a deal with bordering Serbia. Given the fact that Kosovo is not recognized as an independent state by several countries, including Serbia, how do you evaluate the outcome of these upcoming negotiations?

I think the continuation of the dialogue with Serbia will be imposed as one of the top priorities of the new government, albeit not being such in the governing program. What is a priority for the new government is what I said above: dialogue from "the bottom" with Serbs and other national minorities on social and economic issues. The dialogue with Serbia would come next. There is a very simple, but the fundamental question to be asked about the nature of the dialogue with Serbia: what is there to negotiate with Serbia, when Kosova has declared independence on 17 February 2008 and ever since exists as an actual state, recognized by over 100 UN member states? One does not negotiate its internal form of organization, cause that’s a blatant violation of sovereignty, to begin with. The reason Kosova should enter into a dialogue with Serbia, I believe, should be restricted to topics of war reparations, the status of missing persons, cultural artefacts, compensation for wartime sexual rapes, pensions during the apartheid of the 90s, and so on.

The problem between Kosova and Serbia is not the lack of negotiations and dialogue. In fact, over the last two decades, Serbia and Kosovo have spent more time engaged in formal dialogue and negotiations than not. This began even before the war of 1998-99, when the leader of the Kosovo Albanians, Ibrahim Rugova, and the Yugoslav president, Slobodan Milošević, signed a deal on the restoration of Albanian-language education in Kosovo, brokered by the Community of Sant’Egidio. When the agreement was not implemented, Albanian students took to the streets in Prishtina on October 1, 1997, thus marking the crucial and decisive break with Rugova’s official line of “peaceful resistance” against the regime of Milošević. After the outbreak of war in February 1998, negotiations resumed three months later, ending with the Rambouillet Conference in February 1999. Negotiations ‘resumed’ in the early 2000s, with the Kosovar Albanians represented by UN administrators (who administered Kosovo from June 1999 till February 2008). Later, in 2005, came the formal negotiations for Kosovo’s final status settlement. They ended in 2008, thus adding to that document the foundation for the declaration of independence, while Serbia continues its claims over Kosovo though informally accepts the benefits of that document. It is crucial to recall that between 2008 and 2010, both countries were part of a legal process at the International Court of Justice, which on 22 July 2010 issued its advisory opinion according to which the declaration of independence of Kosovo did not violate international law.  And, a new period of EU-brokered talks began in 2011. Since then, a few dozen agreements have been signed, out of which only a handful have been, or are being, implemented. After Kosovo declared independence on 17 February 2008, the EU urged Kosovo and Serbia to fresh negotiations. The format of negotiations was first conceived as “technical”, the aim of which was to ‘better the living of the people of both countries’. It consisted of the mutual recognition of travel documents, university diplomas, telecommunication, et cetera. However, a few years later, the dialogue was advanced to a political level, to meetings between heads of state and government officials, in a seemingly never-ending process.

Thus, the problem between Kosovo and Serbia is rather, that there is too much dialogue.

Breaking away with this logic of perpetual negotiations, with its economy, which in effect renders impossible any possibility of moving beyond this cycle, would have been a genuine political act for the country, as well as for Serbia itself.

ILNA: Some believe that the core of the Kosovo issue is anthropologically attributed to the ethnic difference of the people with the ruling government. How valid is this analysis?

There are many theories on the roots of the Albanian-Serbian question, which range from those who see it as a problem of cultural differences or a religious problem between Christianity and Islam, up to the – most popular– historical theory of the conflict. According to this, in order to understand what really happens between Albanians and Serbs, one has to go back to hundreds of years of history of conflicts, intricacies and complex relations between the two nations. In one word, the predominant take on this problem is Huntingtonian: there is a clash of civilization between these two nations.

Perhaps following up from the previous question, the ultimate proof of this approach consists in understanding a hand-shake between an Albanian and a Serb, or sitting at the same table, as a great achievement. In my understanding, this is one of the most de-politicizing positions one can take.

I think the way to really understand the situation or the “core” of the Kosovo issue resides in the present; we do not need to go back into the annals of history to understand the present. The problem between the two countries is a political one and can be understood only politically. It is a question of colonization of Kosovo, the denial of the right to self-determination, the struggle for equality, justice and freedom. It is only through these notions that we can understand what the core of the problem is.

ILNA: Dubbed Kosovo’s Che Guevara by reporters in the 1990s when he organized mass student protests against Serbian repression, Kurti vowed to tackle economy and unemployment, fight corruption and introduce three months of compulsory military service. What lies before this leftist leader to tackle the economy, given the fact that Kosovo's Government debt accounted for 17.1 % of the country's Nominal GDP in December 2018 and 2.08 percent of the average inflation rate?

One of the main difficulties of the new government, in my understanding, does not consist of how successful they will be in implementing the governing program. The condition for the possible success seems to be at the structural level. See, it is still unclear, at least to me, what it really means to do party politics in an inconsistent nation-state, as Kosovo is. First, there is always a certain inconsistency in the electoral procedure, it becomes untrustworthy. To avoid any possible misunderstanding, this said, I am not calling or dreaming for an ideal electoral system – the ultimate liberal dream if there ever was one – because I am well aware of its structural impossibility. What I have in mind here is a pragmatic idea of having an electoral system, which at the very least works. Again, not in the sense understood by OSCE and other international organizations, but in the regulative dimension of it. To mention one simple fact: since independence, no government in the country had a full four-year mandate and I think this has to be analyzed as a symptom of the system itself. The danger I see here, at least with the VV government is that when the representation is not a stable level to power, then the popular support might stop. I think this is something this government has to take into account.

I have always had the impression that in the current form of the state, party politics based solely on a parliamentary basis, is not an adequate perspective or answer on the specificities of the totality here (to recall Althusser’s dictum that one cannot see everything from everywhere). However, once inside, we can see the totality of the situation. Parliamentary politics presuppose a nation-state, which Kosovo is not (neither legally, nor practically). What is at stake with this government, I believe, is not only to set some stable rules but to play the game in such a way, as if there are some stable rules in the background. And, I am very well aware that this is not an easy thing to do. Being pushed back at the starting line time and again, I fear, might be almost politically fatal.

On the other hand, the governing program of the government has nothing “revolutionary” in itself. However, it consists of many neuralgic points, so to speak, where what might appear as a minor change, can turn out to be an important turning point. What is the most important aspect of this program, to my understanding, is that it is not based on what in medicine they would refer to as “symptomatic treatment”, that is, a medical therapy which affects only the symptoms, and not the etiology. And, this demands long, passionate, and extremely difficult hard work.