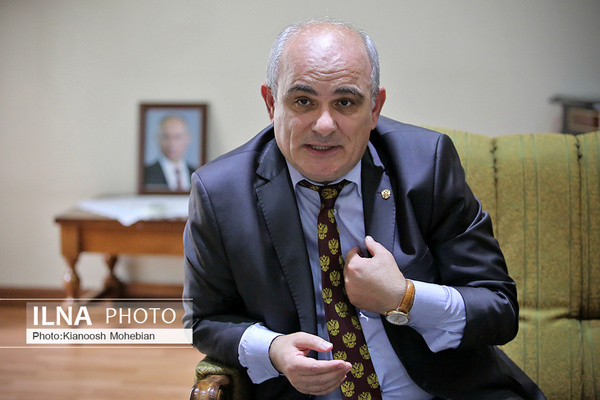 Speaking to ILNA news agency correspondent, he added “US sanctions do not have any impact on Iran-Russia relations, welcoming increased ties between the two countries.”

Asked about Tehran recent action for reducing its nuclear commitments, the Russia diplomat said, “I was in summit and said to Iran’s deputy foreign minister that we are separated from Europe.”

“We have always condemned Trump’s administration withdrawal from Iran deal and say how we can trust the United States when a government signs a deal and the other government leaves it.”

Tensions between the United States and Iran have been steadily building for months. After the US pulled out of that Obama-era deal in 2018, the administration engaged in a maximum pressure campaign against Iran.

Russia’s ambassador to Tehran said Iran and Russia are “strategic partners”, adding that “our opponents” in the West are trying to drive a wedge between the two countries.

“Unilateral and illegal US sanctions have a very negative effect and create problems for Russian companies, especially private companies, but we are trying to circumvent these sanctions,” he added.

Stressing that Moscow is “extremely pleased” with its cooperation with Tehran, he said, “in order to complete ongoing projects and define joint projects between the two countries a tripartite meeting of presidents of Iran, Russia and Azerbaijan will be held in Russia in near Future.”

Asked about Europe’s alternative channel to send money to Iran, known as Instrument in Support of Trade Exchanges (INSTEX), that would sidestep US sanctions against the country, the Russia diplomat said, “We have announced several times that we are ready to participate in the INSTEX, but the European side has not explained to us what the details of this mechanism are.”

“I do not think INSTEX can meet Tehran's expectations because it focuses on food and medicine, but Iran's main expectations are banking and oil sales.”

“The Russian Federation is concerned about the unfair sanctions imposed on Iran, and Russia is ready to help Iran to thwart negative impacts of the US sanctions,” Dzhagaryan underscored. “Our opponents are seeking to create divisions between Iran and Russia, but will not be successful.”

Russian Ambassador to Iran pointed to UK seized an Iranian tanker off the coast of Gibraltar and said that Britain says it has seized oil tanker for violation of EU sanctions on Syria but we cannot boycott a country and force other countries to recognize our sanctions. “Russia never recognizes any sanctions against Iran and Syria.”

He added that I hope tensions between Iran and UK will be resolved as soon as possible through negotiation.

UK - Iran tensions have been rising since Iran's Islamic Revolutionary Guard Corps said its navy has captured a British-flagged oil tanker in the Strait of Hormuz.

The Russia diplomat said “I think U.S. is behind the scenes of this tension, whether in Gibraltar or in the Persian Gulf. If the U.S. did not unilaterally withdrawal from Iran deal, the world and the region would be so different from now.

He reiterated that Russia will keep standing by the country and supporting the Iranian government.