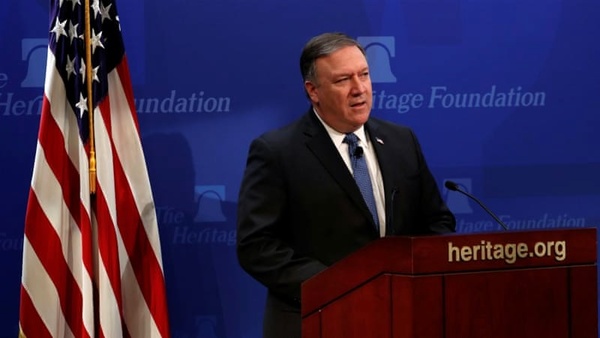 According to BBC, In the aftermath of the U.S. withdrawal from the agreement, Pompeo demanded major changes from Iran and said America will not allow the country to develop a nuclear weapon: "Not now, not ever."

Pompeo discussed the Trump administration's plans for dealing with Iran following the president's withdrawal of the U.S. from a nuclear deal struck by President Barack Obama's administration, known as the Joint Comprehensive Plan of Action, or JCPOA.

He threatened even tougher sanctions against Iran. Sanctions that had been lifted under the agreement are due to go back into effect, and they are expected to pressure an already shaky economy.

"This is just the beginning. The sting of sanctions will be painful," Pompeo said before a packed house at the conservative Heritage Foundation. "These will be the strongest sanctions in history when complete."

Among other demands, Pompeo said that Iran must stop developing ballistic missiles, release Americans who are being held in prisons in the country, and stop support of militant and terrorist groups in the Middle East and beyond. He also called for a ban on a heavy-water reactor, which is the most basic way to develop nuclear energy.

The secretary of State also used the administration's ongoing negotiations with North Korea as a model for a new agreement with Iran, saying it demonstrates a commitment to diplomacy against even the biggest adversaries of the U.S.

Pompeo is a former GOP congressman who previously served as director of the Central Intelligence Agency under Trump.