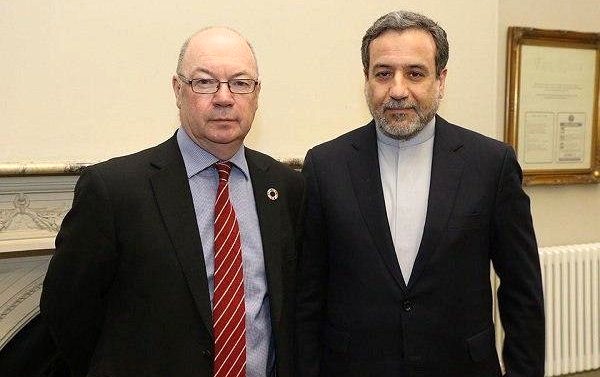 British Minister for Middle East Alistair Burt who is Tehran for talks with Iranian officials in a tweet termed his negotiations with Iranian Deputy Foreign Minister Abbas Araqchi as constructive.

In his tweet, Alistair said it was good he was back to Tehran and said he held constructive talks with Araqchi on the Iran nuclear deal and expansion of bilateral relations.

Alistair said in his talks in Tehran he raised London's concern about dual national individuals detained in Iran. His trip to Tehran was in line with Tehran-London periodical talks.

Last month, Araqchi traveled to London where he held talks with British foreign office officials on a host of issues ranging from regional and international developments to the 2015 Iran nuclear deal officially known as the Joint Comprehensive Plan of Action.

During his stay in London, Araqchi attended the British Parliament and Chatham House, the Royal Institute of International Affairs and delivered a speech to a group of political analysts and media persons on the JCPOA and regional developments.

Burt's trip to Tehran comes at a time when with the approach of a deadline set by US President Donald Trump to decide whether or not to stay in the Iran nuclear deal Europe is trying to convince Washington to preserve the deal.

Trump is to announce his decision on May 12 on extension of Iran sanctions waiver and on whether US will stay in or leave the JCPOA. Trump has threatened he will leave the deal if its so-called flaws are not fixed.

The office of the British prime minister in a statement released Sunday said the leaders of the UK, France and Germany agreed that the JCPOA was still the best option.

Britain, too, believes that the Joint Comprehensive Plan of Action was an important achievement and to this end its new Ambassador to Iran Rob Macaire told the Islamic Republic News Agency recently that his government would do all within its power to preserve the deal.

Although Supreme Leader of the Islamic Revolution Ayatollah Ali Khamenei as the highest ranking authority of the county in a fatwa has declared use of nuclear weapons as religiously forbidden, some parties to the Iran deal still speak about Tehran's attempts for access to such weapons.

The International Atomic Energy Agency has time and again verified the peaceful nature of Iran's nuclear program and confirmed that the country has complied with its pledges under the JCPOA.