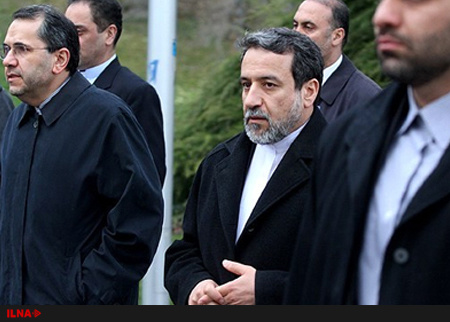 Iranian Deputy Foreign Minister Seyed Abbas Araqchi warned against the breaching of the Joint Comprehensive Plan of Action by the US, and said that the JCPOA (nuclear deal) is not only a nuclear deal, but also a security agreement which should be abided by all parties.

"Should the JCPOA face any setbacks by other parties, it will have severe consequences for the international community," Araqchi said.

He reiterated that the JCPOA is a security agreement and is directly involved with the regional and international security.

The Iranian deputy foreign minister, meantime, said that for over a year, US President Donald Trump has been trying to destroy the JCPOA or make some changes in it in order to what he calls "fixing" it, but he has been unable to achieve any results.

Araqchi reiterated that in case of any setbacks to the nuclear deal, the consequences will be severe for the entire international community.

"The international community, and even the US allies and the European countries are against Trump’s position on JCOPA,” he said, adding, "The UN Security Council resolution which also includes the nuclear deal, will prevent what Trump is intending to do.”

Araqchi underlined that the Islamic Republic of Iran for months has been declaring that it is prepared to respond to any potential scenario regarding the fate of the JCPOA.

"We are definitely well-prepared to respond quickly to any decision made by Trump or others; we will fully defend the interests of the Iranian people," he added.

President Trump delivered an ultimatum to the European signatories on January 12. It said they must agree to fix what he called as the terrible flaws of the Iran nuclear deal - which was sealed under his predecessor Barack Obama - or he would refuse to extend US sanctions relief on Iran.

US sanctions will resume unless Trump issues fresh “waivers” to suspend them on May 12.

Araqchi said earlier in March that Tehran has reminded the US about its commitments under the nuclear deal in a bilateral meeting with the American side.

On the sidelines of the 8th regular meeting of the Joint Commission of the Joint Comprehensive Plan of Action in Vienna on March 16, Iranian delegation, chaired by Araqchi, held separate bilateral meetings with the Group 5+1 (the US, the UK, Russia, China and France plus Germany) except for the UK team to discuss issues regarding the implementation of the nuclear deal as well as how to better implement it.

"We met with the French, German and Russian delegation on Thursday and on Friday, we met with the Chinese and American delegation," Araqchi told reporters in Vienna after the regular meeting of the Joint Commission of the JCPOA.

"In the bilateral meeting with the American delegation, we only talked about the implementation of nuclear deal and the US violation of its obligations under the deal; we reminded them about a number of issues that we consider to be breaches of obligations or delay in fulfilling their obligations, especially in the area of airline purchasing licenses," he added.