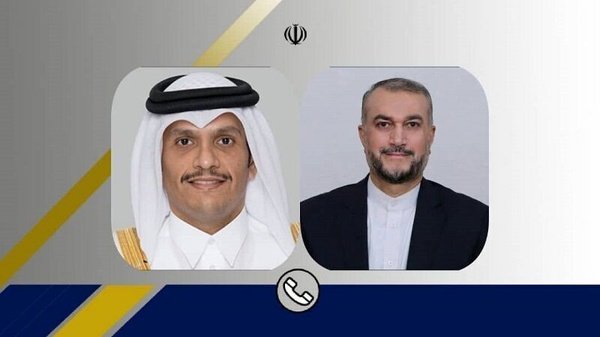 According to Qatar News Agency (QNA), the two foreign ministers had a phone conversation on Saturday night, when they discussed bilateral ties as well as the latest developments regarding negotiations to revive the Joint Comprehensive Plan of Action (JCPOA).

The Qatari FM expressed hope that the Islamic Republic of Iran and the United States can reach a consensus to revive the nuclear deal, which should be a fair agreement to help remove concerns from all parties.

The Arab official also noted that the agreement will be in favor of security and stability in West Asia.

Following several months of negotiations, the talks in Vienna, Austria, to lift anti-Iran sanctions have reached a point where the US’s acceptance of the requirements of a stable and reliable agreement will pave the way for achieving a final deal in the shortest time possible.

Iran emphasizes that the condition to reach an effective deal is that it should protect economic profit for the Iranian nation, while the economic issues are being used as leverage to put pressure on the Iranians.

However, the weak administration of President Joe Biden, which cannot make a decision because of domestic woes and pressures from the Zionist regime, is not capable of deciding to return to the nuclear deal, so Washington resorts to determining fake deadlines and putting the blame of prolongation of talks on Iran’s shoulder.

The Islamic Republic conveyed its opinions and demands regarding the European Union’s suggestions on August 16 and the US replied on August 24; then, Tehran commented on Washington’s response, but the White House is still dragging its feet and refusing to reply to the second answer.

Last week, High Representative of the European Union for Foreign Affairs and Security PolicyJosep Borrell claimed that the negotiations came to a deadlock due to political conditions in the US and some stances, adding that the stances of negotiating sides have distanced since the end of summer.