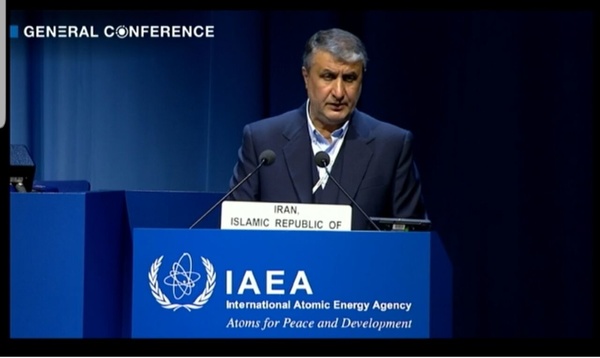 Eslami made the remarks at the 66th Annual Regular Session of the IAEA General Conference on Monday. The conference is being held from 26 to 30 September 2022 at the Vienna International Centre (VIC) in Vienna, Austria.

Iran expects the IAEA to stop certain elements from repeating resolved issues, which were decided on in 2015, to maintain the UN nuclear watchdog's credit and coherence, the AEOI chief said.

The IAEA should refuse to rely on baseless information, which has been proposed by untrustworthy sources, he said, urging the organization to pursue reliable and powerful verification.

The Islamic Republic is always ready to hold talks and interact with other parties, he mentioned.

As to the 2015 nuclear deal, he noted that the Joint Comprehensive Plan of Action (JCPOA) is the outcome of a collective effort, which includes a sensitive balance of responsibilities and reciprocal measures, but in fact, Iran complied with its obligations under the agreement on capacity and pace of its nuclear activities as well as accepting verification in return for lifting illegal sanctions and paving the way for its return to the financial and trade interactions by the other signatories to the deal.

The US withdrew from the accord in contradiction to the international will and resorted to maximum pressure, which doomed to failure, he said, adding that in reaction to the US's violation of commitments and the Europeans' inaction to abide by their obligations, Iran's parliament ratified a law asking the AEOI to pursue the nation's nuclear rights.

However, Tehran is still complying with the 2015 nuclear deal and emphasizes that the Islamic country will return to its commitments, he noted.

The Iranian official also said that the development plans of the Islamic Republic of Iran are in line with the expansion of justice to achieve sustainable development and that the 20-year outlook of Iran's nuclear industry document was ratified at the national level, which is being followed up by the AEOI.

According to the document, the ratio of nuclear power in Iran's energy sector will increase at least 20 percent of the total electricity generation; so, the country plans to set up 10k megawatts nuclear electricity plant in the coming years, he noted.

Moreover, the development of producing radioisotopes as well as the application of nuclear technology in health, agriculture, environment, and industry has been mentioned in the document, the official added.

To this end, the Islamic Republic welcomes the IAEA's Rays of Hope, which contributes to the fulfillment of the 2030 Agenda and the Sustainable Development Goal 3 (Good Health and Well-Being), Indicator 3.4 to reduce premature mortality from non-communicable diseases by one-third, he noted.

Eslami went on to say that the IAEA is responsible to help materialize the goal of a zero-carbon policy.