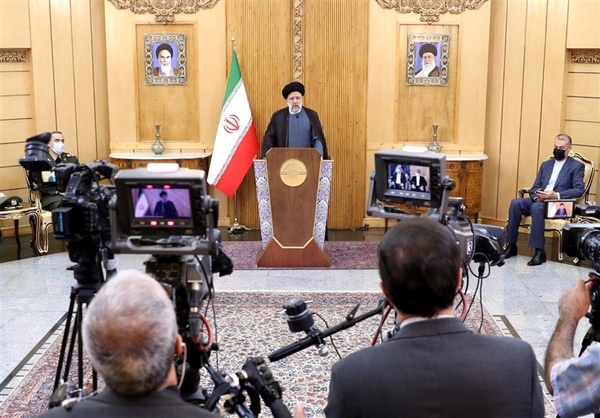 Iranian President Ebrahim Raisi pointed the finger at the global arrogance for the assassination of IRGC member Hassan Sayyad Khodaei in Tehran, pledging that Iran will exact revenge for the terrorist attack.

Speaking to reporters before leaving Tehran for Oman for an official visit on Monday, Raisi expressed his condolences to the Islamic Revolution Guards Corps (IRGC) and the family of Khodaei, who was martyred in an assassination attack in Tehran on Sunday.

The president said an investigation into the attack would reveal that the global arrogance was undoubtedly behind the criminal act.

He said those who have been defeated in the battlefield by the forces defending the holy shrines of Shiite Muslims in Syria are expressing their frustration with such assassination attacks.

The president emphasized the need for Iranian security officials to pursue the case seriously, adding, “No doubt the revenge for the blood of the great martyr against the criminals will definitely be taken.”

On his official visit to Muscat, the president said Iran and the Sultanate of Oman are determined to broaden ties in various fields, such as trade, energy sector, and tourism.

Unveiling plans to sign a series of agreements during the trip, Raisi said he will focus on efforts to promote bilateral and regional cooperation with Oman.

His one-day visit is being made at the official invitation of Sultan of Oman Haitham bin Tariq Al Said.

It is the Iranian president’s fifth foreign trip after taking office in August 2021.

Last week, a 50-strong delegation of Iranian businesspeople and economic activists visited Oman to pave the way for the expansion of trade relations between the two nations.