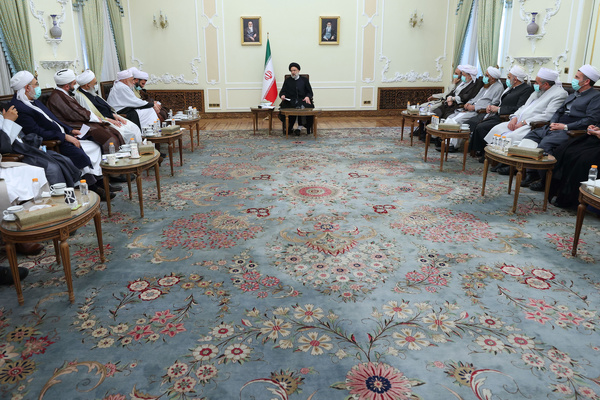 Speaking in a meeting with a group of Sunni scholars and clerics, Ayatollah Seyyed Ebrahim Raisi referred to the government's serious efforts to solve people's livelihood problems, and stated, "The government pays attention to the concerns of the people that are conveyed to the clerics and tries to solve these problems".

Explaining the situation in the country at the time of the inauguration of the 13th Administration, Ayatollah Raisi said, "Budget deficit of nearly 500 trillion, remaining monthly debt of 10 trillion, death of nearly 700 people a day with coronavirus, unprecedented inflation, injection of the 4k-toman currency to the market and the unfavorable situation of the stocks of basic goods in the country were among the issues that the government was dealing with in the early days after its inauguration".

Ayatollah Raisi described the payment of the 4k-toman currency as one of the country's problems and stated, "In practice, a large part of what was paid as the subsidized exchange rate was in the service of corruption and rent.

In fact, we had a waste of the country's resources and subsidies did not reach the people, so in order to prevent this situation from continuing, it was decided to give this amount to the last chain and the main beneficiary, the people and consumers, instead of paying to the first supply chain".

Emphasizing that paying 400,000 tomans per month to each person is a difficult task, experts consider this method as a step towards approaching justice and eliminating absolute poverty.

In another part of his speech, referring to the important position of Sunni Iranians and scholars in the history of the country, the President said, "You Sunni clerics and thinkers have provided many services in their own country, and Shiites and Sunnis have lived together in Islamic Iran for many years".

Ayatollah Raisi referred to the request of some Sunni scholars to employ them more in managerial positions and said, "Using qualified people is an important and necessary thing, and the criterion for the government is efficiency, and in every province, I go, I emphasized the local forces must be employed more".

In another part of his speech, Ayatollah Raisi referred to the growth of takfiri movements in the region and said, "We must be careful about the influence of Takfiri and Salafi ideas in the country; British Shiites and Sunni Americans are two sides of the same coin, and both are anti-unity in the Islamic world, while unity is a strategy for the Islamic Republic of Iran, not a tactic".