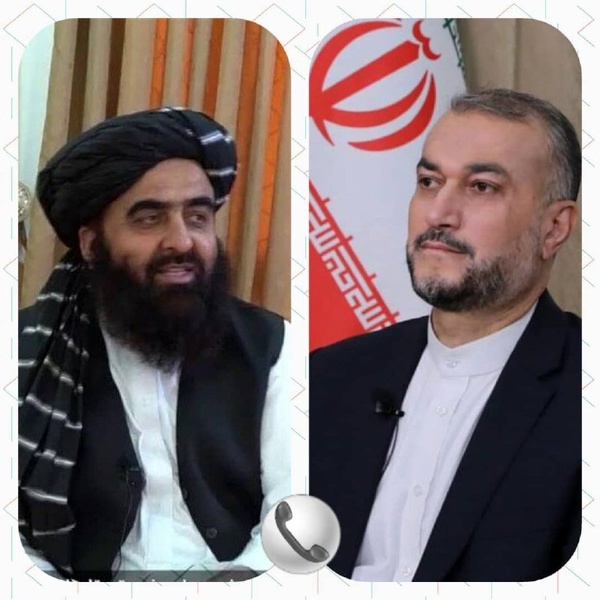 Iranian Foreign Minister Hossein Amir Abdollahian in a phone call with Amir Khan Muttaqi who is the acting foreign minister of the Taliban government in Afghanistan said that Iran has a positive and constructive view of Afghanistan.

Millions of Afghan brothers and sisters have been Iran’s guests for the last forty years and enjoy the necessary and appropriate facilities, Amir Abdollahian said.

He regretted that the malicious, purposeful and false propaganda campaign on some social networks by the enemies of the good relations between Iranian and Afghan nations had caused some unfortunate incidents.

He referred to his talks with the Afghan side earlier this month on the sidelines of a meeting of foreign ministers of Afghanistan's neighboring countries in China, saying that Iran has a positive and constructive view of Afghanistan, and exchanging delegations for cooperation between the two countries, sending humanitarian aid and keeping its missions active in providing services to the people of Afghanistan has been within this framework.

Obviously, we expect the interim governing body in Afghanistan to establish cooperation with Iran in maintaining the security of the Iranian diplomatic facilities and diplomats, controlling the borders and not allowing unauthorized passers-by, as well as fulfilling their mutual obligations in accordance with applicable agreements.

He welcomed the interim governing body’s order to ban narcotics cultivation in Afghanistan and expressed Iran’s readiness to cooperate with Afghanistan to develop alternative cultivation.

He hoped that with the cooperation of the two countries, the problem of narcotics trafficking would be solved.

Meanwhile, expressing his deep regret over the recent incidents and the attack on Iran’s missions in Kabul and Herat, Muttaqi assured the full security of Iran’s diplomatic facilities, diplomats and staff in Afghanistan.

He appreciated the hospitality of the Iranian government and people and providing extensive services to Afghans in difficult conditions.

He stressed Afghanistan’s commitment to developing cooperation in the interests of the two countries and the neighboring Muslim nation and assured that he would spare no effort to address Iran's concerns.

He pointed to the issue of Iran's water rights and welcomed the dispatch of an Iranian delegation to Afghanistan for this purpose.

He also stressed the Taliban's seriousness in countering narcotics.