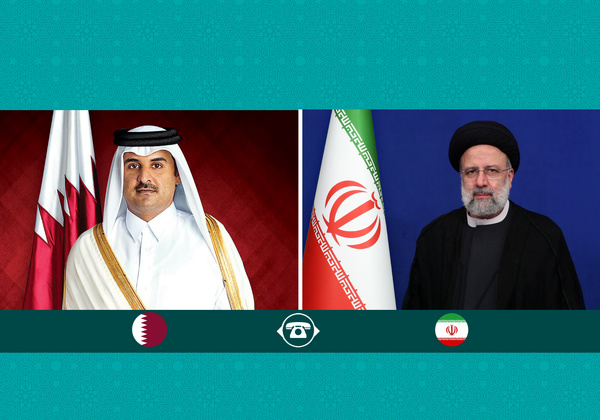 The President of the Islamic Republic of Iran stated that today, the Islamic Republic of Iran and Qatar are determined to further develop bilateral relations, and said, "Tehran welcomes the development of relations with Doha in various fields and believes that the development of these relations are in the interests of the two nations and the nations of the region".

Speaking on Sunday night in response to the phone call of the Emir of Qatar Sheikh Hamad bin Tamim Al Thani, Ayatollah Dr Seyyed Ebrahim Raisi congratulated the holy month of Ramadan, referring to the vast potential for increasing the level of relations and cooperation between the two countries.

He said, "Tehran and Doha can take effective steps in the interests of the two nations and establish stability and security in the region by taking advantage of all the capacities of cooperation and establishing close coordination".

Referring to the forthcoming visit of the Emir of Qatar to Tehran in the near future, the President noted, "During this visit, major decisions will be made in order to further develop relations and cooperation between the two countries in various fields".

The President further expressed his satisfaction with the holding of the FIFA World Cup in Qatar and wished the country success in holding this important sporting event, noting, "The Islamic Republic of Iran is ready to provide any help in Kish Island in holding the World Cup games in the best and most glorious way possible".

Sheikh Hamad bin Tamim Al Thani, the Emir of Qatar, also stressed in this phone call that his country is fully committed to further developing relations with Tehran after the long meeting and negotiations between the two countries in Doha, saying, "We believe that your visit plays an important role in the development of brotherly relations and strengthening cooperation".

Sheikh Hamad bin Tamim Al Thani expressed satisfaction with the Iranian national football team's participation in the World Cup, and said, "In this tournament, we will welcome our brothers well".

The Emir of Qatar noted, "Regarding the cooperation between the two countries in holding the competitions, the Minister of Roads of Qatar will soon meet and discuss with his counterpart on Kish Island about how to cooperate".