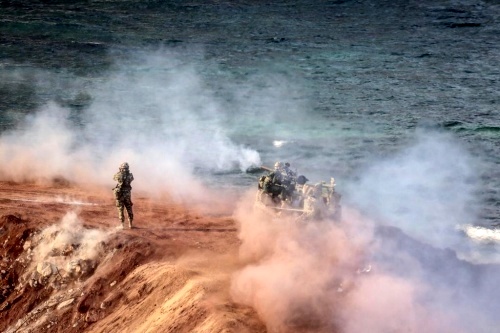 Iranian Foreign Minister Hossein Amirabdollahian said The Great Prophet 17 military drill conducted by the IRGC was a manifestation of Iran's unwavering determination to defend and to respond to the enemies, adding that it conveyed message of brotherliness and security for friendly and neighboring countries.

In his Instagram post, Amirabdollahian said Iran as a powerful country has always been the harbinger of peace and stability in the region.

Abs also the Iranian foreign ministry spokesman rejected the interference of the UK foreign office in Iran's defense capabilities, and said that the Islamic Republic of Iran acts within the international laws and regulations and in accordance with the country's defense needs; hence not only such remarks and taking positions are considered as interfering in Iran's internal affairs, but they also indicate the continuation of London's double-standard policies.

"This country (the UK) in an endless rivalry for sale of the most destructive weapons to West Asia region and other crisis-hit regions signs military pacts such as AUKUS without paying heed to non-proliferation treaty (NPT) and simultaneously expresses concern about Iran's military drills," Khatibzadeh said.

He pointed out that the Islamic Republic of Iran's nuclear programs as per thousands of hours of inspection and numerous reports by the International Atomic Energy Agency (IAEA) have been fully peaceful and Iran has not had and does not have any program for military use of nuclear technology that would want to design a missile program for it, and said, "The Britons know better than anyone else that Iran's missile program is in no way related to the UNSC Resolution 2231 and its content."

The Iranian foreign ministry spokesman said that it is the UK that by misinterpreting the Resolution 2231 practically violates it.

While condemning British officials' efforts to inspire that Iran is a threat for the region, Khatibzadeh said that it is the insatiable appetite of the UK and other European countries to sell huge volume of advanced weapons to some regional countries and with full knowledge of violating the international law, especially human rights, due to the usage of the weapons that causes instability and insecurity in the region, including the human tragedy in Yemen.

"Hence, it is them who should be accountable and responsible before the oppressed people of the region and the international community for increasing instability and insecurity in the region,"  he added.

The Iranian foreign ministry spokesman underscored that the Islamic Republic of Iran neither gets permission from anyone nor engaged in talks over its defense program.

The UK Foreign Office had in a statement condemned the firing of ballistic missiles by Iran in Great Prophet 17 military drills.

At the final stage of the Great Prophet 17 joint drills of the Islamic Revolution Guards Corps (IRGC), Iranian forces successfully fired some 16 ballistic missiles on Friday.