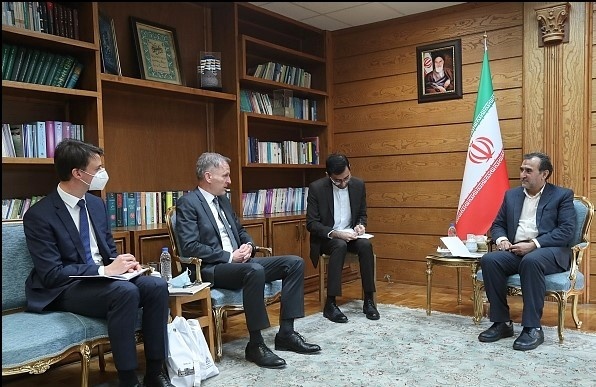 Iranian Vice president for legal affairs said that Iran has always welcomed negotiating and has never left the negotiation table, adding that America was guilty for ruining the JCPOA and the Europeans merely watched that country’s breaching of the JCPOA.

Mohammad Dehqan made the remarks in a meeting with the German Ambassador to Iran Hans-Udo Muzel.

The two sides exchanged viewpoints on bilateral relations in various field and the future of the nuclear negotiations.

The vice president for legal affairs said that the history of Iran and Germany’s amicable relations dates back to150 years ago and the two nations has cultural commonalties.

“The Iranian government’s general approach is broadening communications with various countries and we hope relations with Germany, too, will be strengthened. We hope to see that Germany, as a strong European country, will preserve its independence and will not yield to the US unilateralist approach, but act as an influential country at the international scene,” said Dehqan.

He said that Iran has always welcomed negotiations and has never left the negotiation table.

“In the past, too, by remaining committed to the JCPOA commitments unilaterally, we tried to ease the international worries, and today, too, we hope with the establishment of a new government in Germany and the stronger presence of the Europeans we will reach a more balanced agreement,” added the vice president.

Dehqan said that the US was guilty for ruing the JCPOA and Iran expected the European side, and especially Germany to play a more active role.

“The JCPOA was an international document that had been approved at the UNSC. But the Europeans were only the observers of America’s behavior in breaching the JCPOA. The history will not judge positively the Europeans’ behavior,” he added.

The German ambassador, too, referring to coming to power of a new government in Germany, said: The German government as a non-nuclear country, tries to facilitate a comprehensive agreement which will stabilize the relations among different countries.

“I hope that 8th round of negotiations after the Christian New Year holidays will lead to positive results,” he added.

In the meeting the Iranian vice president for legal affairs in response to the German ambassador’s legal requests promised to pursue them through the relevant organizations.