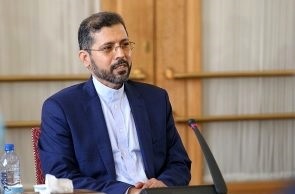 The spokesman of Iran’s foreign ministry has reiterated that all US ‘maximum pressure’ sanctions should be lifted at once and that Tehran would reject any interim arrangement.

Speaking to state television Thursday, Saeed Khatibzadeh was reacting to reports that US officials had discussed with Israel a possible step-by-step approach to reviving Tehran’s 2015 nuclear deal with world powers.

“The position of the Islamic Republic has been clear for months and its new government without any hesitation has articulated its position,” Khatibzadeh said. “American sanctions should be lifted all at once, and their removal should be verifiable, together with objective guarantees.”

Recent reports in American media spoke of an interim agreement possibly suspending some sanctions, with waivers promising the US would not take action against third parties paying money owed to Iran, in return for some limitations on the Iranian nuclear program. There have also been reports that Israeli officials, who opposed the 2015 deal, dismissed the idea.

Khatibzadeh resisted a question from state television framing the Vienna talks as between Iran and “the other party,” meaning the US. “We don’t have another party,” he said. “Iran is in negotiation with 4+1, and our focus is on ways to lift US sanctions.”

The “4+1” refers to the remaining parties to the 2015 deal, the JCPOA (Joint Comprehensive Plan of Action), who are formally involved in talks with Iran in Vienna that resume on November 29: China, France, Germany, Russia, and the United Kingdom.

The JCPOA was in 2015 signed by Iran and the P5+1, the five permanent members of the United Nations Security Council plus Germany, but the US, having voted for the JCPOA at the UNSC, then left the agreement in 2018 and imposed ‘maximum pressure’ sanctions.

In six rounds of talks in Vienna the US has taken part indirectly. Tehran has recently emphasized that Washington, which has been emphasizing its close consultation with Israel and the Persian Gulf Arab states, is not formally in the diplomatic loop.