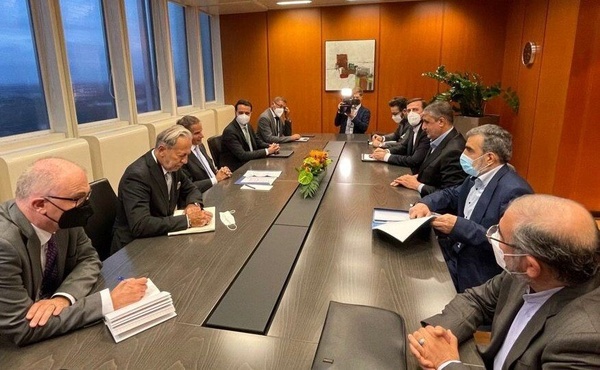 Head of the Atomic Energy Organization of Iran (AEOI) Mohammad Eslami and Managing Director of the International Atomic Energy Agency (IAEA) Rafael Grossi in a meeting in Vienna on Monday agreed that setting the foundations for relations based on mutual respect and good will is necessary.

“The two sides while admitting that Iran is an important partner of the IAEA, agreed that establishment of relations based on mutual respect and good will is necessary,” he added.

Mohammad Eslami, head of the Atomic Energy Organization of Iran (AEOI) who is in Vienna to attend the 65th General Assembly Meeting of the International Atomic Energy Agency (IAEA) met and conferred with his Russian counterpart, the managing director of Rosatom.

Before the IAEA General Conference, Eslami said in an address: Iran is the cradle of civilizations and a peace loving country, which has throughout history contributed to the advancement of sciences and technologies throughout the world.

“In this framework, we are quite determined to pursue our nuclear activities and programs, and as our country’s president has said on September 17, 2021, at Shanghai Cooperation Organization (SCO), no issue can halt Iran’s peaceful nuclear activities, which are in the framework of the international rules and regulations,” he added.