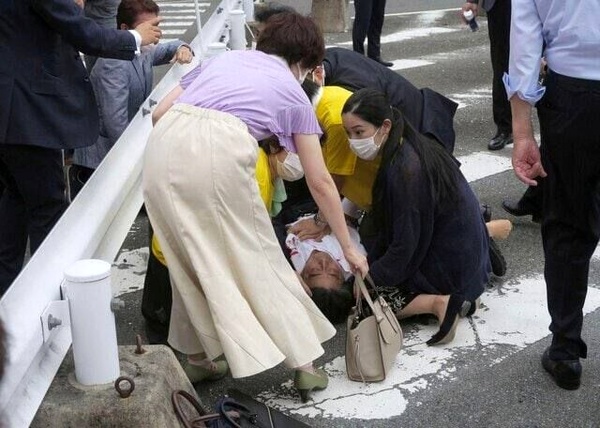 A few minutes ago, Japanese media reported that Abe, who was shot during his speech in a parliamentary campaign in Nara, succumbed to wound.

The longest serving official in Japan was shot from behind in front of railway station at 11:30 local time and fell down following two shots were heard.

Spokesman of the Ministry of Foreign Affairs Nasser Kanani said on Friday morning that Iran as a victim of terrorism, which has lost renowned officials in over past four decades, follows up the reports on assassination attempt against the former Japanese premier with serious concern.

The Islamic Republic of Iran condemns the terrorist move categorically, the spokesman emphasized.

Iran’s embassy in Tokyo twitted earlier: We condemn the coward assassination. We wish for his health and recovery by the God.

The United States’ Secretary of State Antony Blinken reacted to the assault, saying that the US is deeply concerned about shooting of Shinzo Abe.

Former US president Donald Trump wrote in his social media platform account that Abe was a real friend for me and more importantly for the US. This is a big blow to the extraordinary people of Japan, who loved and adored him very much. We all pray for Shinzo and his family.

American Ambassador to Tokyo Rahm Emanuel said he was sad and shocked because of the shooting.

--The longest premiership in Japan

Shinzo Abe’s chaired as prime minister from 2012 to 2020. He is considered the longest-serving premier in Japan. During his term in office, the country tended towards the rightwing.

Abe was one of the main supporters of revising Japan’s peaceful Constitution after World War II.

Japan is preparing to hold elections for the upper house or the House of Councillors on Sunday.

According to polls, Abe’s Liberal Democrat Party (LDP) is expected to win the parliamentary elections decisively. The victory can speed up the altering of the Constitution.

Japan possesses one of the harshest regulations in the world on carrying firearms.