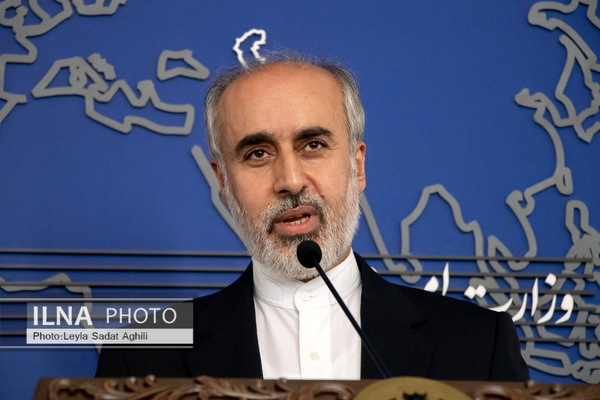 In his weekly press briefing on Monday, Kanaani criticized the United States for failing to focus on JCPOA revival talks and instead trying to seek concessions from Iran in other areas.

“The American officials know that Iran is not ready to negotiate and give concessions under pressure and threats. (Reaching) an agreement has its own logic and Iran’s stance towards the JCPOA talks is quite clear,” said Kanaani.

The official said that it was the United States that pulled out of the JCPOA in 2018 while Iran remained committed to the deal.

He said Iran is still interested in concluding JCPOA revival talks with the US, European powers, Russia, and China, adding that the other parties to the deal are as much interested in reviving the agreement as Iran.

However, Kanaani recommended that European parties to the JCPOA stop submitting to US demands.

Commenting on recent protests in Bahrain that coincided with a trip by the prime minister of the Zionist regime to the Persian Gulf country, he said that the public in the region has continuously been against efforts by certain governments to normalize ties with the Zionists.

The spokesman said the way Zionist journalists were treated in Qatar during the 2022 World Cup showed that the people in the region hate the Zionists even more than before the normalization efforts began a few years ago.

Kanaani rejected US accusations that Iran was behind a vessel confiscated in regional waters that carried Iranian-made weapons to Yemen and described them as a repetition of baseless claims about Iran’s role in Yemen.

He condemned efforts by certain governments in the West, including the US, to have Iran removed from the United Nations women’s rights body, adding that those governments have been capitalizing on social unrest in Iran to pile more political pressure on the country.

Kanaani said if the drive to have Iran removed from the UN body succeeds in a vote planned for mid-December, it would set a dangerous precedent that undermines the rights of member nations that have supported Iran’s membership in the body.

Reiterating his previous statements about talks between Iran and Saudi Arabia to revive their diplomatic ties, the Foreign Ministry spokesman said Iran is committed to the negotiations but said that Tehran is waiting for Riyadh to take “concrete action” on agreements reached in the five rounds of talks held in Iraq.

He said Iran is planning to take legal action against the London-based Iran International television channel over its role in fomenting riots in Iran, adding that the action will also affect the United Kingdom which has hosted the TV station as well as those providing financial support to the network.

The official said US sanctions on Iran have made it difficult for Iranian and Chinese companies to boost their cooperation as part of a 25-year partnership deal signed between the two countries two years ago.

He said, however, that Iran and China have continued to boost their bilateral ties despite the sanctions.

Kanaani also welcomed reports about a decision by the central Iraqi government to station troops on the border between its autonomous region of Kurdistan and Iran, saying the move would be a positive step toward strengthening security and stability along the borders between the two countries.