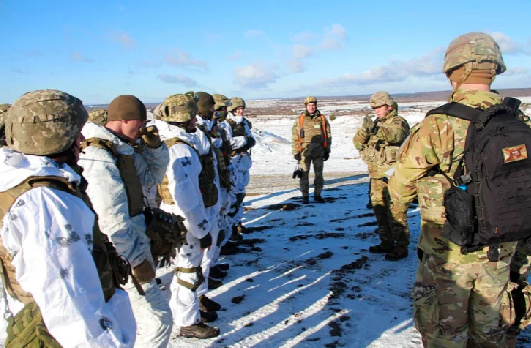 US ambassador to the United Nations, Linda Thomas-Greenfield, told the council during a special open session on Monday that a Russian invasion of Ukraine would threaten global security.

“Colleagues, the situation we’re facing in Europe is urgent and dangerous, and the stakes for Ukraine and for every UN member state could not be higher,” said Thomas-Greenfield, warning of “horrific” consequences if Russia attacks Ukraine.

“Russia’s actions strike at the very heart of the UN charter. This is as clear and consequential a threat to peace and security as anyone can imagine,” she said.

The Russian military has been amassing troops near the country’s border with Ukraine, sparking a diplomatic crisis and heightening US and European fears that Moscow may be preparing for an imminent invasion. Russia has denied it is planning to invade, but has vehemently opposed Ukraine’s efforts to join NATO.

Moscow also wants security guarantees that the US-led alliance will stop its expansion into former Soviet republics, but Washington and NATO have rejected the demand as a “non-starter”.

On Monday, Russia’s UN envoy Vasily Nebenzya accused Washington and its allies of drumming up the threat of war despite Moscow’s repeated denials of a planned invasion.

“The discussions about a threat of war is provocative in and of itself. You are almost calling for this. You want it to happen. You’re waiting for it to happen as if you want to make your words become a reality,” Nebenzya said during the Security Council meeting.

After the UN session, the White House once again called on Russia to resolve the impasse diplomatically.

“If Russia is sincere about addressing our respective security concerns through dialogue, the United States and our Allies and partners will continue to engage in good faith,” US President Joe Biden said in a statement.

“If instead Russia chooses to walk away from diplomacy and attack Ukraine, Russia will bear the responsibility, and it will face swift and severe consequences.”

But on Monday, Russia’s Nebenzya once again said Ukraine should be barred from joining NATO. He also slammed Western military support for Kyiv, saying that it is fuelling the conflict in eastern Ukraine.

“The noninclusion exception of Ukraine to NATO, the nondeployment in its territory of foreign troops – all of this is just one part of the agreement that could fundamentally improve the military-political situation in Europe and for the world as a whole,” he said.

Meanwhile, the United Kingdom’s ambassador to the UN, James Kariuki, dismissed Russia’s denial of a planned invasion of Ukraine, calling on Moscow to “stand down” its troops.

“In 2014, Russia denied to this council the presence of its forces in Crimea. In reality, its soldiers were annexing part of an independent, democratic Ukraine,” Kariuki said. “Today, Russia denies that its forces are posing a threat to Ukraine. But yet again we see disinformation, cyberattacks and destabilising plots directed against an independent, democratic country.”

Russia annexed Ukraine’s Crimean Peninsula in 2014 and shortly thereafter supported a separatist rebellion in the country’s east, where fighting has killed more than 13,000 people and displaced millions.

The UK government has said it is laying the groundwork for punishing sanctions against Russia if it moves militarily against Ukraine, and earlier on Monday, Foreign Secretary Liz Truss announced legislation that would toughen penalties against Russian officials and businesses as well as individuals close to the Kremlin in the case of an invasion.

The proposed measures include freezing assets and imposing travel bans on targeted individuals.

“Whether you support Russia’s aggressive actions against Ukraine, or you’re of wider significance to the Kremlin, we will have the power to sanction you,” Truss said. “Nothing is off the table and there will be nowhere to hide.”

The Kremlin responded by accusing London of inflaming tensions in Europe. “An attack by a given country on Russian business implies retaliatory measures, and these measures will be formulated based on our interests if necessary,” spokesman Dmitry Peskov told reporters during his daily news briefing.