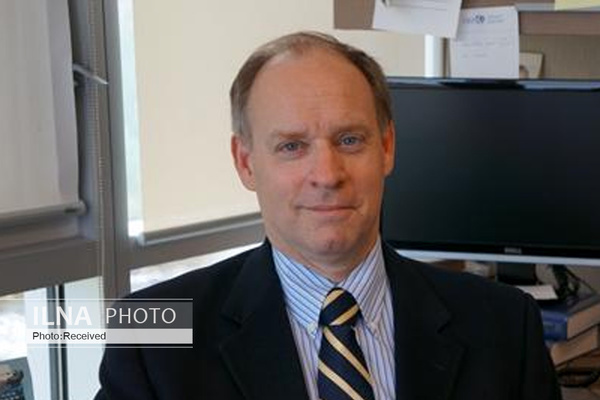 He said in an exclusive interview with ILNA news agency that despite the exclusion of medicine as an explicit item banned by the U.S. sanctions, there is a general chill that is discouraging any transactions with Iranian entities. Dane Rowlands received his Ph.D. in economics from the University of Toronto and is currently the Paterson Professor of International Affairs at Carleton University. He teaches and conducts research on international development, the IMF, conflict management, and migration.

Here you can read his full interview with the former director of the Norman Paterson School of International Affairs about Washington's recent policies toward Iran and the impact of these policies on the lives of ordinary citizens:

Q: Coronavirus is spreading around the world, Iran has had a hard time getting the medicines it needs because of US sanctions; how can the Iranian authorities deal with these difficulties?

A: I do not have much to say on this question, as it is more of a health matter. I think the virus is beginning to run its course in several countries, hence the gradual reopening of sectors in different economies. I would defer to the experts that the main way of dealing with the situation is to require social-distancing, increase testing, and hoping that a vaccine is developed soon.

Q: But there are still no vaccines to protect the body against the disease it causes, Covid-19.

A: I have also seen no evidence of an effective treatment or vaccine. Vaccines normally take 2-5 years to develop for a new virus. There are more resources being directed towards COVID-19, so maybe that can be brought down to 2-3 years. There are some promising candidate vaccines, but their safety and efficacy are not known, or close to being known.

Q: What will be the global impact of the novel coronavirus?

A: It is very early to tell. The virus has not yet spread fully to poorer countries, where the effects could be devastating. It is to be hoped that people in these countries will get by until a vaccine is developed.

Q: But in this condition, Trump Administration policy to apply “Maximum Pressure” on Iran; is it reasonable to impose sanctions on Iran?

A: I am skeptical of the value or efficacy of sanctions generally, but as a moral or ethical question I do not think it should ever be used to prevent directly (e.g. prohibiting trade in medicines) or indirectly (e.g. by restricting financial capacity to make payments) medicine and food from being accessible to the citizens of a country.

A: Despite the exclusion of medicine as an explicit item banned by the U.S. sanctions, there is a general chill that is discouraging any transactions with Iranian entities. This effect operates primarily through concerns about violating financial sanctions.

Q: But the harsh sanctions only have had an impact on ordinary citizens and are increasingly affecting vulnerable patients.

A: Iran is engaging in regional policy and a nuclear policy that the U.S., and many others, find unacceptable. I also find these policies to be of some concern, as I am strongly opposed to nuclear proliferation. Iran has the sovereign right to pursue these policies, just as other states have the right to oppose them and put sanctions on. However, I think that preventing people from accessing food and medicine, and other essential goods and services, is unacceptable from a moral perspective, and also from the perspective of effective policy. The case of sanctions against Iran is one of the few current cases where sanctions are being directly or indirectly imposed on such a broad basis; most sanctions nowadays are much more restricted and targeted at government officials and entities. As indicated, I cannot support sanctions that directly or indirectly restrict access to food and medicine.

Q: What can authorities do in order to help de-escalate a conflict situation?

A: I would say that the crisis affords an opportunity for Iran to engage more constructively with the world. Iran has to position itself to be able to access treatments, and ultimately a vaccine, by participating more fully in international efforts of peace and cooperation. Many countries in the region are afraid of Iran; allaying these fears would improve Iran’s image and make the United States (and especially its current administration) look worse, making it harder for other countries to tolerate its policies towards Iran, and making it harder for Americans to support its government policies as well.