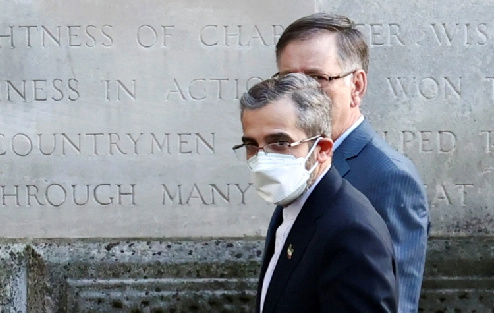 The United States must “accept reality” and agree to lift its sanctions on Iran during next week’s nuclear talks in Vienna, according to Tehran top negotiator.

Representatives of Iran and the other signatories of its 2015 nuclear deal will be in Austria starting November 29 to try to restore the Joint Comprehensive Plan of Action (JCPOA), which the US abandoned in 2018.

As before, the US will participate indirectly in negotiations that if successful will see harsh US sanctions on Iran lifted, and bring Iran back to full compliance with the terms of the accord.

Iran has previously said it is ready for a “good agreement” in Vienna, but the US must accept responsibility for reneging on the JCPOA, lift all sanctions imposed since 2018 at once, and guarantee it will not leave the deal again.

The director general of the International Atomic Energy Agency (IAEA), Rafael Grossi, is expected to meet Iran’s new foreign minister, Hossein Amirabdollahian, in Tehran for the first time on Tuesday.

Grossi is expected to discuss IAEA monitoring in Iran, which has been restricted as part of the country’s response to the US withdrawal from the nuclear deal, and in response to the assassination of a top nuclear scientist and several attacks on nuclear sites. Iran has blamed the attacks on Israel.

What follows is a Q&A with Ali Bagheri Kani, Iran’s deputy foreign minister, who will lead the Iranian negotiating team in the Austrian capital. In written replies to Al Jazeera, he discusses Iran’s position in the talks on sanctions and nuclear advances, the region, and what it expects of European signatories.

Al Jazeera: It appears Iran and the US have adopted conflicting positions prior to the Vienna talks, especially in terms of scope and ways of lifting sanctions. Considering the current situation, what is your assessment of the possibility of achieving a good agreement?

Ali Bagheri Kani: It is widely believed that the United States, by withdrawing from the JCPOA, breached the deal blatantly and violated UNSC Resolution 2231 flagrantly.

However, Iran, having overcome the so-called maximum pressure campaign, is sitting at the negotiating table with full preparedness, capacity and total commitment to the 2015 deal. That’s why the Americans, while resorting to deception, try to exploit the political and media environment in their own favour. But it is not to their advantage. They should accept reality and abide by all their commitments.

Al Jazeera: You recently said “we don’t have nuclear negotiations” in Vienna since the terms of the JCPOA have been previously agreed upon. Does this mean that Iran can reverse its steps to advance its nuclear programme and limit IAEA inspections without needing talks? What will happen to a workgroup that was formed during the previous rounds of talks in Vienna to discuss nuclear issues?

Bagheri: Iran continues its nuclear activities legitimately within the framework stipulated in paragraphs 26 and 36 of the JCPOA, the reason behind which has been fully explained in the text of the nuclear deal. Until the violating and non-compliant party to the deal does not demonstrate, in practice, its commitment to the JCPOA, there is no reason for Iran to abandon its rights and entitlements guaranteed by the deal. Everything is clear and there is nothing ambiguous about the nuclear deal to negotiate.

The US and the EU must show that they have the political will to implement what they agreed to do in 2015. They must overcome domestic considerations to resolve this.

Al Jazeera: Iran has repeatedly stressed it won’t discuss its missile programme or regional influence during the Vienna talks. If an agreement is reached in Vienna, will Iran be willing to discuss these issues after?

Bagheri: Countries of the region are the ones that must make decisions about the issues of the region. Any interference from outside the region will bring no benefit for any party. The experience of foreign intervention from outside the region in Iraq and Afghanistan indicates that murder, genocide, the destruction of infrastructure, the spread of terrorism as well as narcotics cultivation and trafficking have been the main outcome of intervention and manipulation by foreign powers during the past two decades. It’s their presence and interference that impedes constructive dialogue.

Al Jazeera: If the talks in Vienna don’t yield results, what are Iran’s alternative plans to counter the sanctions and in dealing with Western powers? How do you think this will affect the future of the region?

Bagheri: Reliance on domestic capabilities and capacity has been a key to success for Iran over the past four decades. Experience has shown that self-reliance would prove more productive and fruitful than anything else in the sophisticated process of political, economic and even security and military developments. We have gone a long way and we are a patient people.

Al Jazeera: What will Iran expect of European powers in the Vienna talks? Are they also expected to make any guarantees concerning their full future commitment?

Bagheri: Europeans should demonstrate their abidance by the JCPOA in action and not words, and put an end to non-compliance and the bankrupt policy of maximum pressure. Many Iranians wonder why the Europeans are at the negotiating table if they cannot make decisions independent of Washington.