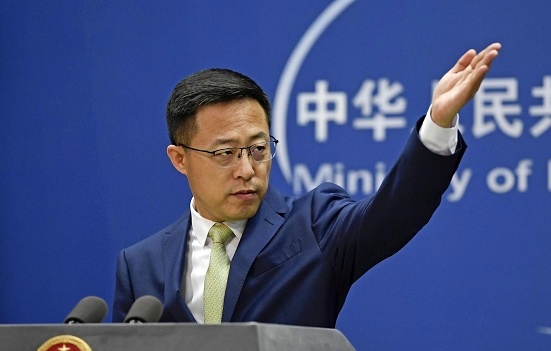 China has reiterated its support for the implementation of the JCPOA, saying “diplomatic efforts” and “concrete actions” are key to a smooth restart of talks between Iran and the P4+1 group of countries slated to be held in the Austrian capital of Vienna later this month.

Speaking at a regular press conference on Friday, China's Foreign Ministry Spokesperson Zhao Lijian said Beijing always believes that upholding and implementing the nuclear deal, officially known as the Joint Comprehensive Plan of Action (JCPOA), is the “only effective way” to resolve the outstanding issues pertaining to Iran's nuclear program.

“All parties should step up diplomatic efforts and take concrete actions to push for a smooth restart of negotiations on resuming compliance with the JCPOA and achieve positive results.” He expressed hope that all relevant parties would pay heed to the "overall interest, be rational and exercise restraint, and avoid disrupting diplomatic efforts to advance the negotiations."

The United States unilaterally abandoned the multilateral nuclear deal in 2018 despite Iran’s full compliance with its nuclear undertakings, as repeatedly certified by the UN nuclear agency. The US then unleashed a “maximum pressure” campaign against Iran, which practically deprived the country of all of the deal’s economic benefits.

Iran fully honored its nuclear obligations for an entire year, after which it decided to ramp up its nuclear work as a legal “remedial measure” against the US violation of the deal and the abject failure on the part of the other signatories, the E3 in particular, to safeguard its benefits.

Envoys from Iran and the P4+1 – Britain, France, Germany, Russia and China – are expected to hold the seventh round of discussions in Vienna on November 29. The negotiations were paused in June, when Iran held its presidential election. Since then, the new Iranian administration has been reviewing the details of the six rounds of discussions held under the previous administration.

In response to a question about a planned visit by International Atomic Energy Agency (IAEA) Director General Rafael Grossi to Iran next week, the Chinese Foreign Ministry official expressed hope that both sides would be able to "properly" settled differences through peaceful channels. “China hopes that the IAEA and Iran can properly resolve differences on monitoring and verification through dialogue and consultation on the basis of mutual respect.” He further called on all relevant parties to play a constructive role in this regard.

Grossi’s trip comes ahead of next week’s meeting of the 35-nation Board of Governors. The IAEA chief paid a one-day visit to Tehran in September and held talks with the AEOI head.