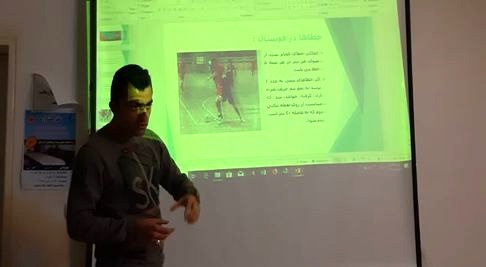 "Football and futsal are among the exciting and active sports that today have been able to introduce their position as specialized sports", Professor Alireza Abbasi says.

Professor Alireza Abbasi, born on August 25, 1987 in Tehran, a researcher in sports science and a well-known figure in the world of futsal and football, said:

Football and futsal are among the exciting and active sports that today have been able to introduce their position as specialized sports. Due to the nature of these sports and the environment in which the game is played (including the size of the field, play environment, playing time, game systems and skills and conflicts in these sports) several factors play a role. they do. Therefore, it is natural for both sports to have special physiological and motor needs in order to develop the necessary programs according to the special needs of this sport.

In football, various forms of training and activity are displayed by the players, such as the 400-meter run where the intensity of activity is above the maximum or the marathon where the intensity of activity is moderate, more emphasis. The development of aerobic power can have a positive effect on the quality of ball retention, and increasing aerobic power can lead to a significant increase in the amount of work when two teams compete with the same skill level.A team that is more prepared can advance the match with a faster pace throughout the match. Research has shown that although aerobic power alone is not the key to success in football, a minimum threshold of approximately 60 ml per kilogram of body weight is essential. When the aerobic capacity of football players is less than this amount, their performance should probably fluctuate.

In research, the maximum oxygen consumption of football players was higher than futsal players. Aerobic power is the main source of energy production in football and futsal, and there is a great relationship between the type of training, taking into account the intensity or duration of aerobic power training courses, as well as the general comparison between different players of the football team according to According to their activity in different conditions of the game was done with the players of the futsal team There was a significant difference in their aerobic capacity and this could be due to different conditions in the type of skills and training conditions of the players of the two teams.

In the present study, the blood lactate levels of futsal players were higher than football players. Studies show that short-term intermittent activities, such as futsal, are used in longer intermittent activities at high intensities to increase blood lactate levels and, consequently, to increase its ability to harvest and the processes involved in this pathway

Professor Alireza Abbasi added that coaches should pay attention to these points:

Awareness of the differences between elite football and futsal players helps both players and coaches identify and reinforce the qualities needed to reach the top level of performance. Also, this information can help trainers in designing training and training needs. Therefore, player selection is a process that coaches in various sports, including football and futsal, always face. Having indicators that can be used to identify elite players helps coaches a lot in this regard.