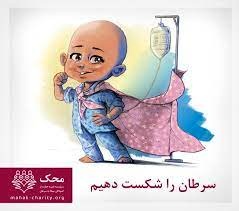 During the past 30 years, MAHAK put its efforts to ensure that all the 38000 families across the country have no concern but their child’s treatment and its constancy under any circumstances. What we are going to read is a story of Reza, one of MAHAK's children, with a happy ending quoted from his mother.

By diagnosing ‘Leukemia’for Reza at age five, fear and anxiety spread in the family. A disease that no one of them have ever heard of it and had no idea how to face; but in the treatment process, they learned to pass these days with patience and gradually realized that cancer is not the end. “I will definitely lose my child, it was the first thing that came to my mind when I heard he has cancer. After referring to a pediatric hospital, meeting children who are in the same condition as my son, and when the medical and support team helped us to get familiar with the path we will go through, then I believed that cancer is curable.” Reza’s mother said.

By diagnosing him with cancer, the family started Reza’s treatment in their hometown with the support of a local pediatric cancer charity, named Kassa which was one of the empowered charities by MAHAK in the empowerment plan of charitable organizations in the cities through a memorandum of understanding. He underwent chemotherapy for a year, but the oncologists recommended a hematopoietic stem cell transplantation. Hence, the family move to Tehran, and the transplantation was performed since then Reza and his family got support fromMAHAK.

Reza and his mother have stayed in the Shariati Hospital in Tehran to perform transplantation. She describes those challenging days as: “The whole first night in the hospital in Tehran, I was thinking how we are going to stay in a city which I know nothing about; until a lady came to us and introduced herself as a social worker from MAHAK Charity. She knew all about our case so, after registering us in MAHAK, we settled in its residential center during which psychologists helped me and Reza to pass treatment and post-transplantation days.”

It should be noted that to observe the health protocols and to prevent virus spread, MAHAK residential centers have stopped giving services to patients and their families after the pandemic in Iran. However, the MAHAK support services department arranged accommodation for the families who have to stay in Tehran for treatment; these families will stay in the specific hotels approved by the medical care team.

Now, it has been 4 years since Reza’s Transplantation. His mother describes his physical condition well and eagerly waits for the day when he will fully recover. However, dryness and narrowing his eyes are the side effects of cancer for Reza who is under treatment with the support of MAHAK; his mother says: “Reza wants to professionally pursue his favorite sport, soccer, as soon as possible and continue studying to be useful in his country.”

We wish lots of moments of happiness and success for Reza and waiting for the day when he comes to us with his definite survivorship news.