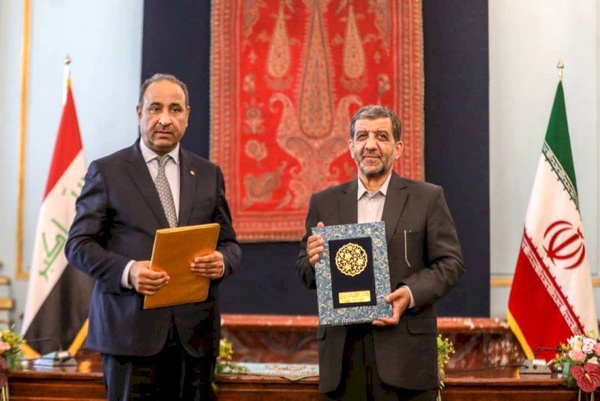 The Minister of Heritage, Culture, Tourism, and Handicrafts announced efforts to remove barriers to land tourism in Iraq and the movement of people by private car throughout the year.

According to the General Directorate of Public Relations and Information, the signing ceremony of the Memorandum of Understanding between the Ministry of Heritage, Culture, and Tourism and Handicrafts of the Islamic Republic of Iran and the Ministry of Culture, Tourism and Ancient Heritage of the Republic of Iraq at noon today, Monday 13 June.  And the handicrafts and Hassan Nazem, the Iraqi Minister of Culture, Tourism, and Ancient Heritage, were held at the Niavaran Cultural and Historical Complex.

Welcoming the Iraqi Minister of Culture, Tourism, and Antiquities, Zarghami said, "I am pleased that an academic with a scientific background has accepted this responsibility, and I am confident that cultural and tourism relations between Iran and Iraq will be established better than before."

He described the cultural heritage and tourism, which is a joint mission of the two sides, as having a high potential for integration and cohesion between the two nations.»

Emphasizing removing obstacles and facilitating relations between the two nations, Zarghami added: "There is no ban in the field of air tourism and relations are established, but this memo emphasizes the removal of obstacles in the field of land tourism throughout the year, which is only timely.  Arbaeen should not be limited and people should be able to travel by private car throughout the year.  "In this regard, the Tourism and Automobile Center is providing the necessary infrastructure for the issuance of license plates."

The Minister of Cultural Heritage, Tourism, and Handicrafts described pilgrimage tourism as the most important area of ​​cooperation between the two countries, adding: "Arbaeen is the largest human community and an irreplaceable phenomenon in the world, which we seek to register worldwide."

"Promoting travel through agencies will boost the economy and employment between the two countries, and provide health and tourism credibility," he said, emphasizing the authenticity of travel agencies and their recognition as well as travel through the agencies.

The Minister of Heritage, Culture, Tourism, and Handicrafts expressed hope that the boom in land tourism between Iran and Iraq and through travel agencies will lead to the transformation of tourism between the two countries.

Expressing his satisfaction with the meeting, Hassan Nazem said that the trip to Iran was of special importance and added:  "And we have come to Iran in a high-level delegation with the presence of officials in the relevant fields."

He referred to the consultations with the Iranian side in order to hold the Arbaeen as glorious as possible and informed about the plans of the Iraqi government for the tombs on the border between the two countries.

Nazem stressed the importance of religious tourism between Iran and Iraq, adding: "This type of travel has a million-dollar goal due to the beliefs of the people of the two comprehensive countries, which should be redefined according to the new concept of post-corona tourism."

In the end, the Iraqi Minister of Culture, Tourism and Ancient Heritage expressed hope that the outcome of this visit will lead to the strengthening of cultural, artistic, and tourism relations between the two countries.

According to the memorandum, the two sides have announced their readiness to provide visa facilities for tourists from the two countries, as well as the exchange of laws, instructions and banking facilities in the field of tourism investment and investment in infrastructure projects, including hotel construction.

This Memorandum of Understanding is valid for two years and will be automatically renewable unless one of the Parties expresses its intention to terminate it to the other Party in a written message through diplomatic channels three months before the expiration date.

General Department of Public Relations and Information of the Ministry of Cultural Heritage, Tourism and Handicrafts