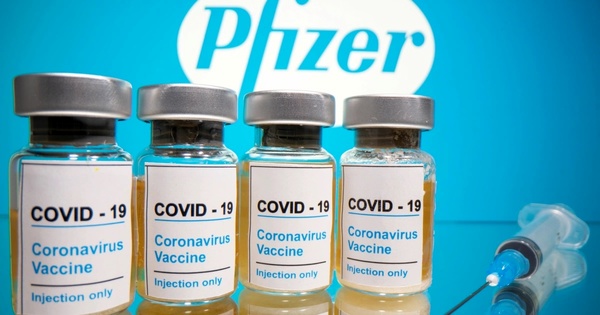 The Pfizer vaccine has caused a great deal of controversy and problem against the coronavirus since its distribution, and the side effects of injecting this vaccine have caused fear and panic in different cases.

Many people who have been vaccinated have struggled with a variety of illnesses, including hospitalization and even death.

So far, various media outlets have reported deaths due to the Pfizer vaccine, even in the United States.

Two months ago, the media revealed that White House Chief of Staff Mark Meadows had also threatened the US Food and Drug Administration to approve the Pfizer vaccine or he would be ready to resign.

According to a US poll, 60 percent of Ohio nursing home staff, about half of California health care workers, and 40 percent of Los Angeles nurses refused to receive the corona vaccine.

Participants in the survey said they are concerned about the dangerous side effects of receiving the vaccine and do not want to be treated like mice.

Pfizer-Biontec or Moderna have lost their lives.

The federal system, the Vaccine Side Effects Reporting System (VAERS), is a federal database that receives reports of these cases. This system is passive, meaning that it does not automatically collect reports, and reports are uploaded to it. Everyone, including health care workers, patients, or their families, can file reports of vaccine side effects.

According to the media, reports on the system about the side effects of Pfizer and Modern vaccines, which have been licensed in the United States to prevent coronary injections, are only part of this, although most unreported cases are thought to be very serious, such as In some cases, patients reportedly died within days of receiving the injection. In one case, a 66-year-old man living in a Colorado nursing home reported a day after receiving the injection. The modern vaccine felt drowsy and stayed in bed. The next morning, on Christmas Day, the man was seen standing still with his eyes half open and his mouth foamed. He was no longer breathing and had no pulse.

Cautious reaction and opposition to Pfizer in different countries

These events have provoked a reaction of concern and astonishment in some countries of the world. Following the deaths of several Pfizer vaccine injectors in Norway, Australia requested information from Pfizer and Norwegian authorities.

Roots of opposition to Pfizer vaccine in Iran

In this situation, it is possible to understand why the Islamic Republic of Iran has opposed the import of the American Pfizer vaccine. According to Hamid Reza Jamshidi, Secretary of the National Corona Countermeasures Office and professor at Shahid Beheshti University of Medical Sciences, Secretary of the National Corona Countermeasures Office has said in this regard: Kvax has two pre-sale plans. In the first plan, countries are given the right to choose a vaccine model but at a cheaper price, and in the second plan, countries are given the option to choose a vaccine model, but it is necessary to pay more, which Iran has chosen. Prioritization of vaccine imports has been Kwax's own recommendation to countries, which is why we did not choose to buy Pfizer from the beginning.

Jamshidi pointed to the start of vaccination in some countries in the region and neighboring countries and said: "Vaccine-producing countries such as China, India, Britain, the United States and… have long suggested to other countries that if a country commits to voluntarily perform human testing, Priority will be given to selling the vaccine.

Countries such as Turkey, the UAE, Bahrain, and Saudi Arabia are being vaccinated because they allowed human testing, but Iran did not allow any human testing to be performed to protect the health of the people.

The professor of Shahid Beheshti University of Medical Sciences stated that the United States had blocked the import of medicine for dying Iranian patients for 3 years, for example: We hesitated, so trusting to buy a vaccine from the American company Pfizer is just optimism.

"Because mRNA vaccines are new," he said.

It takes at least four years for their effects to be identified, he said: "More important than the unknown effects of mRNA."

It's a matter of Americans’ negligence.

Jamshidi pointed out that the Supreme Leader also realized from the very beginning that the promises of vaccine delivery were false.

And explicitly saved Iran from the whirlpool of American conspiracies, he continued:

Currently, an Iranian living in the United States is not allowed to send even one acetaminophen to Iran due to sanctions.

A professor at Shahid Beheshti University of Medical Sciences said that if Iran wants to import drugs from the American company Pfizer right now, US government sanctions will prevent it. The US Treasury Department has forced all countries to obtain a license from the United States before exporting any pharmaceutical items or raw materials to Iran.

"We will use all the science of the day to make the domestic vaccine, so at least three knowledge-based companies are currently researching mRNA technology," he said. But because this technology is the first to be used in the world, its long-term effects are unknown.

He added that the Pfizer and Modern vaccines will lose their properties because of the mRNA formula because it focuses on only one gene of the virus, and if that specific gene mutates, because the Iranian vaccine is all the genes of the killed viruses. It has "Inactivated" inside, so no genetic mutation will interfere with the function of the Iranian vaccine.

In short, it can be said that the senior officials of the Islamic Republic, and at the top of them the Supreme Leader, due to their extreme sensitivity to maintaining public health, have serious doubts about the effectiveness and safety of the Pfizer vaccine and distrust of the enemy, based on Previous experiences have banned the import of the Pfizer vaccine.

Saudi King Salman bin Abdulaziz and his son and Saudi Crown Prince bin Salman were among those who received the American Pfizer vaccine in mid-January to survive the Coronavirus.

Saudi Arabia also announced in a hasty decision in late December that it had approved the Pfizer vaccine and started the vaccination process against the coronavirus by injecting the vaccine into the Saudi Minister of Health.

This was at a time when most countries in the world were still undergoing scientific and research processes in this field and had not made a definite decision.

It seems that while the Pfizer vaccine injection has caused serious problems for many people in different countries of the world, Saudi Arabia has not escaped the side effects of using this vaccine.

In recent weeks, the Saudi media has been silent on the process of public vaccination against Corona in the country, and it is not clear how many Saudi citizens have suffered or died from side effects due to the injection of the Pfizer vaccine in Saudi Arabia.

Therefore, it is possible that Saudi Arabia has quietly slowed down or stopped the process of injecting the Pfizer vaccine into its citizens.

Interestingly, Saudi citizens continue to be infected with Corona, which shows that the Pfizer vaccine has not improved the situation of the people of this country. According to the official Saudi state news agency, on February 6, 386 new cases of coronary heart disease occurred in the country. The total number of cases of the virus so far has reached 369,961, of which 2,327 are still being treated, and 401 of them are in critical condition.

On the other hand, some Arabic-speaking users on social media report that the Saudi king is sick after receiving the Pfizer vaccine.

Bin Salman, the 85-year-old Saudi king, has been the subject of numerous media reports, including rumors of his death, due to gallbladder inflammation, Alzheimer's disease, and difficulty speaking for a long time. Published in various media.

Bin Salman has not had a significant media presence since the outbreak of the Coronavirus, and the Saudi media has only occasionally reported on the holding of government meetings in the form of videoconferences, which have not been confirmed by independent news sources.

Due to the severe censorship of the Saudi government news, it is not clear whether Salman bin Abdulaziz, who is also very old, is in a good mood after receiving the Pfizer vaccine, or whether he is struggling with the side effects and problems caused by the use of the vaccine.