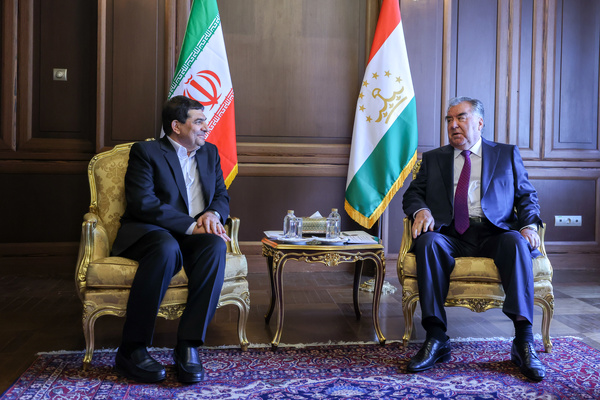 Iranian First Vice President Mohammad Mokhber and visiting Tajikistan's President Emomali Rahmon emphasized the importance of peace, stability, and security in the region, especially in Afghanistan, and preventing disturbance of peace in the Middle East and Central Asia and creating divisions between religions and people in the region by the hegemonic regime and by the United States.

Referring to the deep cultural, historical, and religious commonalities of Iran and Tajikistan, Mokhber said: "Given the rich capacities of the two governments and the nation, Tehran-Dushanbe relations should be expanded and developed at a very acceptable level."

All understandings and documents of cooperation between the Presidents of the Islamic Republic of Iran and Tajikistan will be followed up, operational, and implemented carefully and seriously until the final result is reached.

Pointing to the great potential for cooperation between the Islamic Republic of Iran and Tajikistan in the fields of energy, transportation, customs, and ports, he said: "Iran is ready to export technical and engineering services, as well as scientific and academic exchanges between the two countries."

Meanwhile, Rahmon called for The prospects of working and understanding between Iran and Tajikistan in the fields of trade, technology, health, energy, transportation, and academia should be further expanded.

He called for developing the prospects of working and understanding between Iran and Tajikistan in the fields of trade, technology, health, energy, transportation, and academics.

The Tajik government believes that a new chapter in cooperation between the two countries has been opened, he stated.