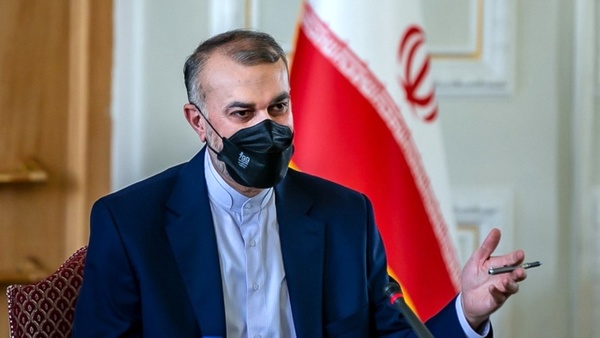 Foreign Minister Hossein Amirabdollahian says that the Vienna talks should have tangible outcome for the Iranian nation.

No one accepts the approach of wasting time, Amirabdollahian said in a state TV program on Monday evening.

Majlis (the Iranian Parliament) and the Government are after fulfilling the nation's rights at the talks, he said expressing hope that the other sides would negotiate based on wisdom and logic.

The US first mistake is the use of threat against Iran, the foreign minister noted, stressing that Washington has to be polite.

He went on to say that Iran welcomes any kind of talks to be held based on logic.

Turning to the issue of next Shanghai Cooperation Organization (SCO) summit, the foreign minister said Iranian President Ebrahim Raisi will attend the gathering.

As Amirabdollahian announced, the new Iranian government is after making use of capacities of the SCO.

Iran has always paid attention to development of economic cooperation with the SCO member countries, he added.

The SCO has currently eight members including China, India, Kazakhstan, Kyrgyzstan, Russia, Pakistan, Tajikistan and Uzbekistan; while Iran and three others act as observers.

About cooperation with other countries, the foreign minister said that following up implementation of the 25-year document on comprehensive cooperation between Iran and China is among the government's main plans.

Touching upon situation in Afghanistan, the foreign minister said Islamic Republic of Iran supports the Afghanistan in which people can decide their own fate and inclusive government can be formed in the presence of all Afghan groups.

All Afghanistan's problems are rooted in the US measures, he underlined.

About the coronavirus pandemic and vaccination, the foreign minister said the country is after importing the vaccine from a secure way.

Also about his plans, Amirabdollahian said 40 percent of Foreign Ministry's planning has been focused on development of economic diplomacy.

Iran will continue its relations with the world in line with fulfillment of Iranian nation's interests, he stressed.

Pointing to his recent visit to Iraq to attend Baghdad summit, the foreign minister said the summit was a good opportunity to hold talks with Iraqi officials.

He also said he visited Syria after Iraq to sens the message to Damascus that all Iraqi neighbors should have been invited to the meeting and ignoring Syria was not acceptable for Iran.

He added that he also followed up enhancing economic and trade cooperation between Tehran and Damascus.

Prior to his visit to Iraq few days ago, Amirabdollahian said that Iran believed that Syria as an important neighbor to Iraq should have been invited to the summit and that Tehran will have direct consultation with Damascus about Baghdad summit and regional countries' important role.