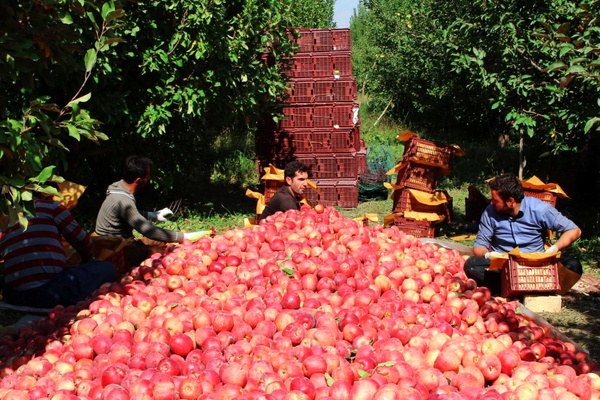 Analysts at Vira Fruits have repeatedly mentioned Iran's rapid development in apple exports. However, it remains unclear why Iran has remained virtually invisible to the leading market participants in this business. As a result, the fact that Iran supplied fruit and vegetable products worth $ 800 million to the Russian market alone in 2020 surprised many people!

According to the 2020/21 season results, Iran will likely be leading the world in fresh apple exports! Iranian exports of fresh apples reached 743 thousand tons as of March 2021. Additionally, Iran's apple exports in March 2021 were still exceptionally high for this period of the year - 157 thousand tons in just one month! Comparatively speaking, Ukraine exports four times fewer apples than Iran each year in March 2021!

The Vira Fruits forecast indicates that the volume of apple exports from Iran between April and July may reach 180-220 thousand tons, which means about 950 thousand tons in total. Iran could even export more than one million tons of apples this season!

China, Poland, and Italy are the only countries that export more than 1 million tons of fresh apples each season. The United States nearly succeeded in this category as well.

Two years ago, in terms of apple exports, it appeared that the five global leaders had an unbeatable position. A decent gap of at least 300 thousand tons separated Poland, Italy, China, the United States, and Chile from other large apple exporters. Despite this, Iran barely ranked among the top ten at the end of 2019.

Trade sources report that not all of Iran's apple exports are included in official trade statistics. Specifically, a significant share of the apple volumes in Azerbaijan are exported overseas through the mediation of Azerbaijani fruit traders and are accounted for as apples from Azerbaijan in statistics. Iranian apples may therefore have even higher export volumes in reality.

In the current season, Iranian apples were primarily sold in Iraq, Russia, and Afghanistan. In August 2020-March 2021, these countries accounted for 73% of Iranian apple exports. In addition to India, the United Arab Emirates, and Kazakhstan, Iran exported 29% of its apples.

The Iranian apple was reshipped partly to other Middle Eastern and Sub-Saharan African countries through the UAE but was consumed mostly by the UAE.

6.3 thousand tons of apples were exported from Iran to Ukraine this season, making it the ninth-best market for the fruit that comes from Iran.

As a side note, Moldova has problems selling apples on the Russian market due to apples imported from Iran. Moldova's apples are competitively positioned in the same price segment as Ukraine's. Iran's expansion into the apple market will indirectly affect exporters in the Middle East and Southeast Asia from Italy, China, Ukraine, France, and Serbia. It is important to keep in mind that Turkish apple producers are targeting the same markets at the same time, as well, where production is also increasing rapidly.

France, Italy, and the United States are large apple exporting countries that reduced their export volumes in the past five years. Globally, France leads the way in declining apple exports.

However, the picture isn't quite as rosy for Iran on the world apple market. As Iranian exporters focus on the low price segment while rapidly boosting production and export volumes, they face the need to reduce prices as logistics costs rise continually.

Iran is currently focused on the low price segment in the apple business, which affects margins accordingly. Iranian apples will need to be upgraded and modernized for production, postharvest handling, and storage, which will not be easy. Low margins make these investments difficult to justify.

Our company, Vira Fruits, is a leading Iranian apple exporter that has always been committed to providing high-quality products and services at competitive prices.

Since we care about our customers' satisfaction, we hire skilled and trained manpower as well as modern fruit storage methods to take good care of products from the very first step, which is sourcing the demanded product, to the very last one, which is delivering them in great conditions to our customers. This makes our company one of the best Iranian apple suppliers.

Iran produces different kinds of apples such as Red Delicious, Golden Delicious, and yellow apples. There are 251,000 hectares of orchards in Iran. Each hectare provides 15 tons of apples per year. Iran is one of the largest apple producers globally, and therefore many countries import apples from Iran.